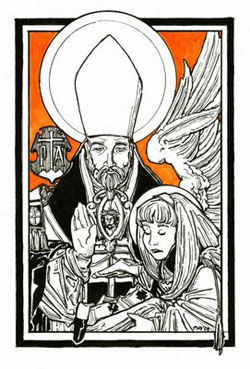 The Apostle of Corsica and bishop. He came from a prominent family of Lombard, Italy, born in Milan in 1533. At an early age he entered the Barnabite Congregation, and became a teacher at the University of Pavia and superior general of the congregation. In 1571 he was appointed by Pope Pius V to Aleria on Corsica. Taking three companions, Alexander rebuilt churches, founded seminaries and colleges, and stood off the pirate raids in the area. He became the bishop of Pavia after refusing other sees, serving only a year before his death. Alexander was a noted miracle worker. He was also spiritual advisor to St. Charles Borromeo and to Cardinal Sfondrato, who became Pope Gregory XIV. He was canonized in 1904 by Pope St. Pius X.