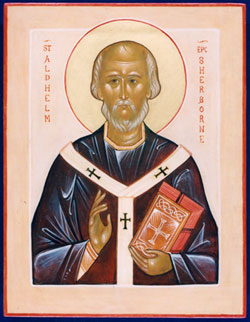 Bishop and abbot, also called Adelemus, Athelmas, Adelnie, Eadelhelm, Aedelhem. Born about 639, and a relative of King Ine of Wessex, he received his early education at Malmesbury, in Wiltshire, England. There he was trained by an Irish teacher, Maildubh, and by Adrian, a native of Roman Africa. Adrian arrived in England with Bishop Theodore and was made abbot of St. Augustine's, Canterbury. After his training in Malmesbury, Aldhelrn was named abbot of Malmesbury, where he practiced great austerity. During his term in office the abbey prospered, and he also founded St. Lawrence monastery, in the area of Bradfordon-on-Avon. Aldhelm went to Rome to represent Malmesbury before Pope Sergius. He also counseled the Wessex Synod. In 705, Aldhelm succeeded Hedda as bishop of Sherborne, Hedda's original diocese being divided. He died only four years later. A silver shrine was erected at Malmesbury in 857 by King Ethelwulf. The shrine honored not only the saint's holiness but his extraordinary and long-lasting impact on English scholarship. He was the first Englishman to promote classical learning in the isles. Some evidence of his own remarkable literary skills is extant.