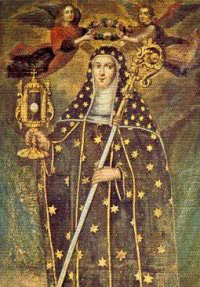 Virgin and abess, also known as Adelgundis, Aldegonde, or Orgonne. She was a member of the royal family of the Merovingians and was raised by two saints: St. Walbert and St. Bertila, her parents. The family resided in the Hainault region of Flanders, a region of the Low Countries. Aldegundis reflused offers of marriage from other nobles and received the veil from St. Amandius, the bishop of Maastricht. She followed this ceremony of acceptance into the religious life with the foundation of a convent near the Sambre River, at a desert site called Malbode. Her sister, St. Waldetrudis, had founded a convent at Mons. Aldegundis' foundation became Mauberge, a noted Benedictine monastery, later taken over by canonesses. Aldegundis is reported to have died of cancer at the age of forty-four.