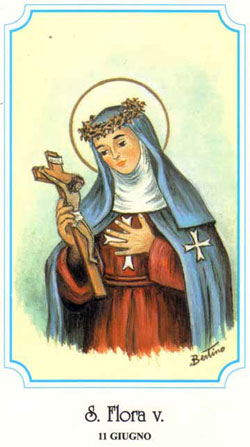 St. Flora, Virgin, Patron of the abandoned, of converts, single laywomen, and victims of betrayal - Feast day is October 5th. Flora was born in France about the year 1309. She was a devout child and later resisted all attempts on the part of her parents to find a husband for her. In 1324, she entered the Priory of Beaulieu of the Hospitaller nuns of St. John of Jerusalem. Here she was beset with many and diverse trials, fell into a depressed state, and was made sport of by some of her religious sisters. However, she never ceased to find favor with God and was granted many unusual and mystical favors. One year on the feast of All Saints, she fell into an ecstasy and took no nourishment until three weeks later on the feast of St. Cecelia. On another occasion, while meditating on the Holy Spirit, she was raised four feet from the ground and hung in the air in full view of many onlookers. She also seemed to be pierced with the arms of Our Lord's cross, causing blood to flow freely at times from her side and at others, from her mouth. Other instances of God's favoring of his servant were also reported, concerning prophetic knowledge of matters of which she could not naturally know. Through it all, St. Flora remained humble and in complete communion with her Divine Master, rendering wise counsel to all who flocked to her because of her holiness and spiritual discernment. In 1347, she was called to her eternal reward and many miracles were worked at her tomb.