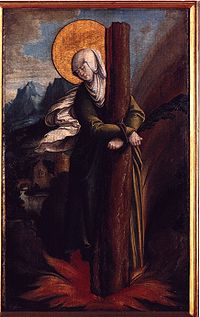 Martyr and penitent, listed in some records as the daughter of the king of Cyprus. Afra was caught up in the persecutions of Emperor Diocletian in Roman Augsburg. She is listed in the Martyrology Hieronymianum. Afra possibly operated a brothel in Augsburg or served as a prostitute in the temple of Venus, living with her mother, Hilaria, and serving women Eunomia, Eutropia, and Digna. When the persecutions started in Augsburg, Bishop Narcissus of Gerona, Spain, arrived in the city and took lodging with Afra and Hilaria, not knowing their profession. His holiness attracted the women, who converted. When officials came looking for the bishop, Afra hid him under a pile of flax. Afra and her household were baptized, and her uncle Dionysius was ordained as a bishop. Arrested, Afra was burned to death, tied to a tree on the small island of Lech. She was buried in Augsburg and her mother erected a chapel for her tomb. Soon after, Hilaria and her serving women were burned alive in their house. Afra's remains were buried in a church named after her. Pilgrims visited her shrine as early as 565. In 1012, the Benedictine monastery of St. Ulrich and St. Afra displayed her sarcophagus. The Acts of Afra give an account of her martyrdom.