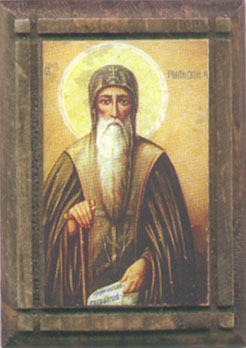 John of Rila One of the first Bulgarian monastics, St. John of Rila was born c. 876/880 near Kjustendil. As a young man, he entered a monastery and eventually became a hermit in the mountains north of Sofia. As his disciples gathered around him, the monastery at Rila was established and flourished. John believed that monks should live in harmony and should include manual labor among their spiritual works. His rule is his only surviving work. He is said to have refused to receive Tsar Peter, co-ruler of Bulgaria and a supporter of monasticism, because monks should have no contact with the princes of the world. After John's death in 946, his body was translated to Sofia and eventually returned to Rila.