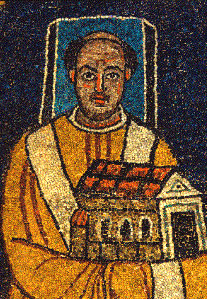 Born in Rome and educated at the Lateran, Paschal was the abbot of St. Stephen's monastery when he was elected pope in 817. He was consecrated the following day to bypass imperial confirmation. Paschal justified this action to Louis I the Pious by saying that he had not sought the office but had undertaken it as an unwanted task. Louis then declared that papal elections are free and did not require imperial approval. The two rem ained on good terms, even after supporters of Lothair, Louis' son and co-emperor, beheaded members of the papal household. Paschal had the perpetrators executed as traitors. Paschal supported St. Theodore of Studios in his struggle against the iconoclast emperor, Leo V. When Paschal died in 824, he was so unpopular that a mob prevented the funeral proc ession from entering St. Peter's.

Continue reading about St. Paschal I