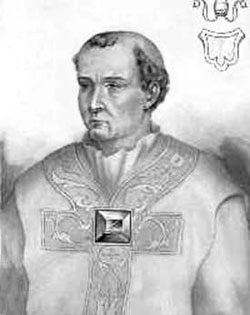 The son of a Roman official, Pope/St. Nicholas I was born c. 820. He developed an interesting theory of church-state relations: both the pope and the emperor possess power; their spheres, however, are different. The pope, since his realm of power is spiritual, can interfere in matters of state, but the emperor, because his realm of power is temporal, cannot interfere in matters of the church. Nicholas was firm in dealing with people who displeased him. He excommunicated and deposed Archbishop John of Ravenna, when he behaved as if Ravenna were independent of Rome. Nicholas deposed Patriarch Photios of Constantinople for deposing the previous patriarch, Igatius. Photios later excommunicated Nicholas. Nicholas refused to allow Lothair II to abandon his wife, Theutberga, to marry his mistress. Nicholas died in 867