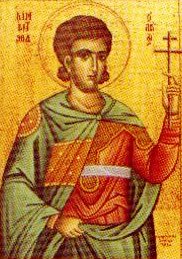 The first pope to govern the church after the various edicts of toleration, St. Miltiades was a Roman of African descent, who was a priest at the time of his election in 311. At some point in his career, he met Constantine, who gave him the Lateran as a gift. In 313, he convened a council which condemned Donatus. Miltiades died the following year, the same year that the emperor called a council at Arles to reconsider Donatus' case.