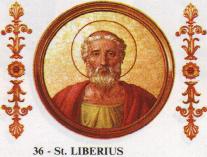 Liberius was a native of Rome and was elected pope in 352. Three years later, Emperor Constantius II exiled the pope for refusing to support the deposing of Athanasius of Alexandria by the Arians. Sent to Beroea in Thrace, Liberius eventually signed, possibly under duress, a document repudiating Nicene Christianity in favor of Arianism and supporting the ousting of Athanasius. Liberius returned to Rome in 358. After the death of Constantius three years later, Liberius reasserted his adherence to the principles of Nicaea. In 362, he began to receive the lapsed into communion. He died in 366; in lists of popes, he is the first uncanonized pope.