His face is emblazoned on stamps in Cameroon, Cuban cigars, commemorative plates in Iowa and teacups in Canada. With close to 1 billion followers around the world"the single largest affiliated body on the planet"the pope's influence on the shape of global culture is hard to quantify. His directives circulate in the most public arenas of international diplomacy and reach the most personal issues of premarital sex and birth control. His work influences the global status of women and homosexuals and the plight of the disenfranchised and impoverished. Today, Catholics are led by Pope John Paul II. But the position transcends the individual; this pope is a passing ocupant of a seat with nearly 2,000 years of history.

According to Catholic tradition, Jesus founded the papacy in the first century, when he chose St. Peter, the leader of the apostles, to be his earthly representative. Thou art Peter and upon this rock I will build my church, he states in chapter 16 of Matthew. I will give to thee the keys of the kingdom of heaven. Those words, which now circle the dome of St. Peter's Basilica in Rome, serve as the biblical mandate for the papacy. All popes are considered symbolic descendants of Peter and are thought to hold Peter's Chair

Since then, there have been more than 260 occupants of the papal office. The institution has endured through the defining moments of European history, including the split of the Roman Empire, the bloodbath of the crusades and the rise of the Italian Renaissance. More recently, popes have struggled to reconcile the strict traditions of doctrinaire Catholicism with the realities of modern life, including defending firm stances against abortion and the death penalty. Here, a short history of some of the most notable occupants of St. Peter's Chair. 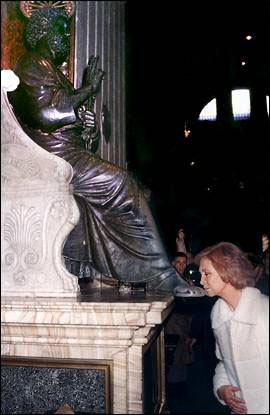 The First Pope: St. Peter (circa A.D early 60s)
After 800 years of kisses, (including a peck from Queen Sofia of Spain, pictured in the photo), the big toe of this statue of St. Peter has been rubbed down to a stump. Catholic tradition celebrates Peter as the first Bishop of Rome and the father of the papacy. However, some modern scholars believe that visitors are kissing the wrong guy. They assert that St. Peter had little involvement in founding the Church of Rome, and his elevated position in the Catholic church was a myth that crystallized into historical fact in third-century writings.Little is known of St. Peter's actual life in Rome, but legend holds that he had a magician father and worked as a fisherman before emerging as the leader of Jesus' apostles. According to tradition, he ultimately faced crucifixion in the Vatican Circus, but because he thought himself unworthy of dying in the same manner as Jesus, he asked to be crucified upside down. 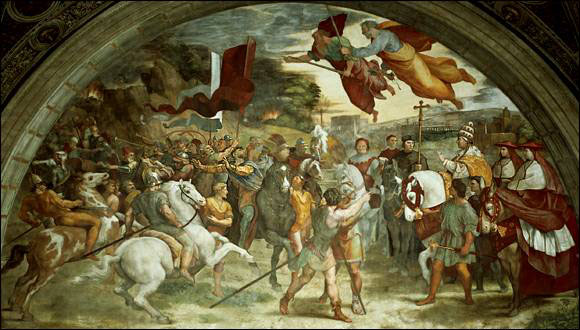 St. Leo the Great (440-461)
When Atila the Hun was sacking northern Italy and closing in on Rome during the fifth century, Pope Leo traveled to Mantua and, as this Raphael mural tells it, personally fought Atila in sword-to-sword combat. Pope Leo also expanded the authority of the papacy by declaring command over bishops and secular matters. 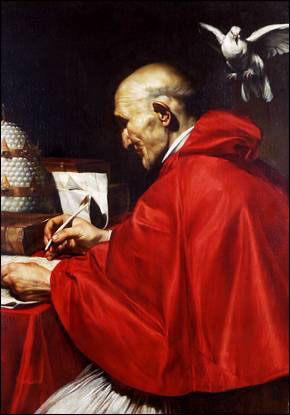 St. Gregory the Great (590-604)
When he abandoned life as a monk to assume the papacy, St. Gregory continued to sing the meditative chants of his monk days (Gregorian chants). He also continued other practices of monastic life, particularly writing. In his book "Pastoral Care," which became a sixth century how-to manual for bishops, he defined the ministry as the practice of "shepherding souls." While he pined for the contemplative pace of his days a monk, Gregory spent most of his time dealing with the earthly problems of his human flock during a time of rampant poverty and plague. He established the role of the pope as guardian of the poor and considered himself "Servant of the servants of God." He was also a strict enforcer of church doctrine, particularly the celibacy provision. 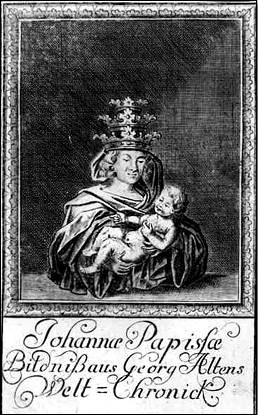 The Female Pope: Joan (855-?)
The legend of Pope Joan, which has circulated in literature for more than 1,000 years, holds that for a period in the mid-ninth century, the chair of Peter was actually held by a woman. As the story goes, Joan was a gifted scholar and scientist who managed to crack the glass ceiling of the Catholic church by concealing her identity under draping clerical robes. As legend tells it, the charade wore thin when Joan, in the process of climbing on her horse for a procession, abruptly gave birth to a son. Some skeptics argue that the story of Pope Joan developed from simple misreading of medieval manuscripts, in which the name Joannus was often shortened to Joan. The Vatican holds that there has never been a female pope. 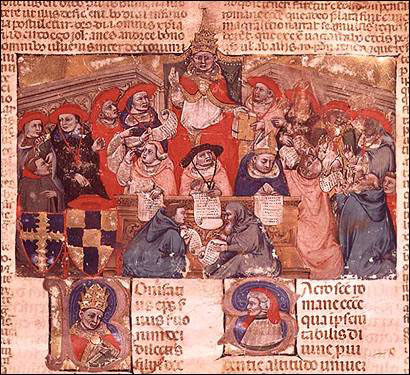 Bonniface VIII (1295-1303)
Bonniface VIII possessed an insatiable hunger for power, and was known for frequent, fiery outbursts. He brazenly claimed authority over all political matters in addition to spiritual ones, and occasionally dressed in Imperial robes. Not surprisingly, this led to frequent conflict with secular authorities, particularly Philip IV of France. Ultimately, Philip excommunicated Bonniface on charges that included sexual misconduct and heresy. 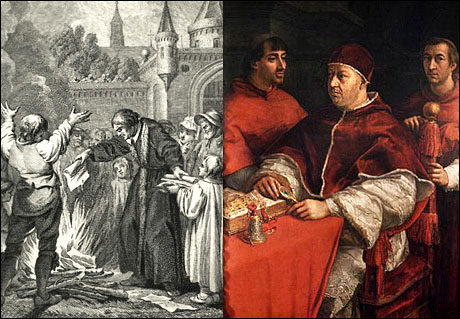 Leo X (1513-1521
Pope Leo X (right center) had a taste for extravagance and found himself with a crippling cash shortage. To cover his debts, he renewed church indulgences, which were payments citizens could make to the church to secure salvation. That did not sit well with a professor named Martin Luther who publicly denounced indulgences. Leo eventually excommunicated Martin Luther, who burned the excommunication order (left). 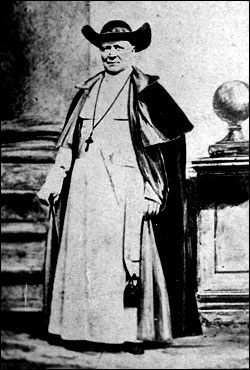 Pius IX (1846-1878)
With a pontificate of nearly 32 years, Pius IX holds the record for the longest reign of any pope in history. In that period, he had ample time to establish his reputation as a reactionary leader who was resistant to relaxing any elements of Catholic doctrine. In his notorious "Syllabus of Errors," he specified that one of the greatest affronts to Catholicism was believing that "the Roman Pontiff can, and ought to, reconcile himself to, and agree with progress, liberalism, and modern civilization." In an effort to ensure that no one tampered with his new order, he convened the First Vatican Council in 1869 and used it to redefine papal authority by claiming the pope's "supreme power of jurisdiction over the whole church, not only in matters that pertain to the discipline and government of the church throughout the whole world." The inflated powers he accorded the pope did not sit well with many Catholics, and a wave of anticlericalism consumed Europe. By the time of his death, Pius IX's popularity was so low that a mob attacked his funeral procession and attempted to throw his body into the river. 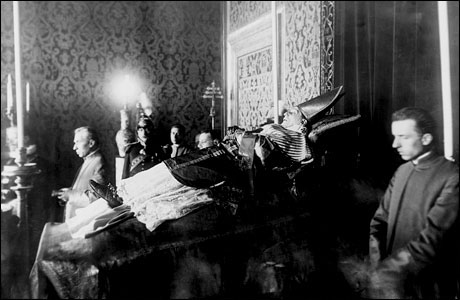 The Peace Pope: Benedict XV (1914-1922)
In seminary, Benedict XV was called "Piccoletto" or "Tiny" because he was so short that not a single existing papal robe fit him. Despite his lack of stature, Benedict XV carried the papacy to new levels by establishing the papal office as a player in international diplomacy. He also quelled rising tensions between integralist and progressive factions of the Catholic Church. By his death in 1922, "Piccoletto" had been replaced with the nick name "The Peace Pope." 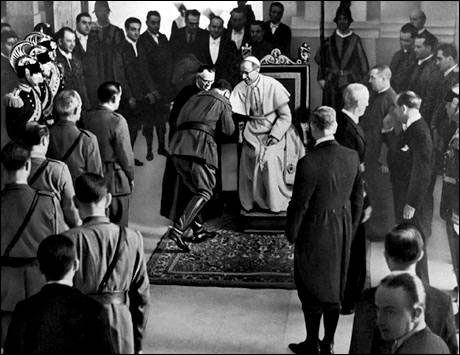 Pius XII (1939-1958)
Pope Pius XII, the leader of the Catholic Church during World War II, has emerged at the center of an explosion of criticism over the Vatican's failure to denounce Hitler's actions during the Holocaust. Several recent books blast Pius for his refusal to speak out against the extermination of Jews in death camps. Despite his silence, Pius opened the Vatican and other Italian properties to shelter Italian Jews and was reportedly involved in a clandestine plot to assassinate Hitler. In 1998, Pope John Paul II issued a formal apology for Christian involvement in the Holocaust, but many found it inadequate. 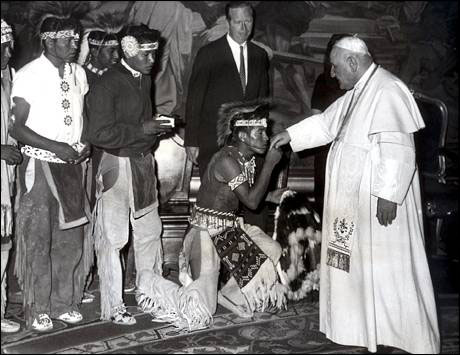 Pope John XXIII (1958-63)
Catholic leaders elected Pope John at the age of 76 on the assumption that he wouldn't rock the boat. However, John broke all of their expectations: he installed a bowling alley in the Vatican, relaxed the church's stringent anti-Communist stance and called the nuclear arms race "utterly ridiculous." In 1962 he convened the Second Vatican Council, where he encouraged church leaders "make use of the medicine of mercy, rather than that of severity." Despite his personal warmth and informality, Pope John maintained a conservative interpretation of Catholic doctrine. 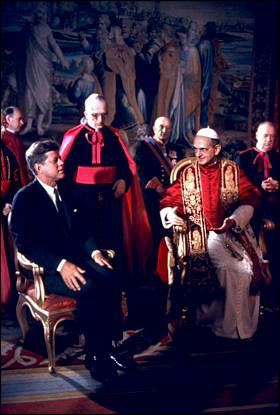 Pope Paul VI (1963-78)
When Pope Paul was crowned, he delivered the allocution in nine languages as a symbolic first step in his plan to reach new communities with Catholicism. As a second step, he sold the official papal tiara and distributed the money to the poor in various countries around the world. Despite his efforts at international outreach, Pope Paul is best known for his 1968 encyclical, Humanae vitae, which banned all forms of birth control, other than rhythm. Humanae vitae aggravated tensions within the church, and put a wedge between Catholicism and secular society. The encyclical stirred up so much controversy that Pope Paul VI vowed never to issue another one. He stood by that promise, and published no more for the remaining ten years of his pontificate until his death. 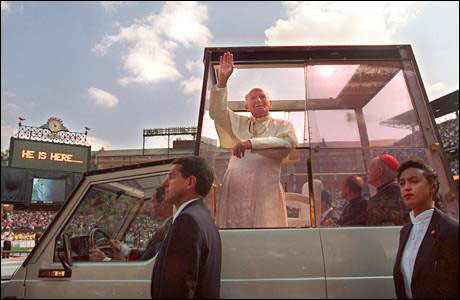 Pope John Paul II (1978-)
Pope John Paul II is the most traveled Pope in history, and has greaty expanded the global reach of Catholicism. He is an outspoken advocate of human rights, but his critics argue that his policies overlook the rights of women and homosexuals. In addition to renewing the ban on women priests and gay marriage, he released Evangelium vitae, which condemns abortion.