The nation's premier Catholic conference, the Big East, already has two clear occupiers of the coveted number one and two seeds during the last week of season play. 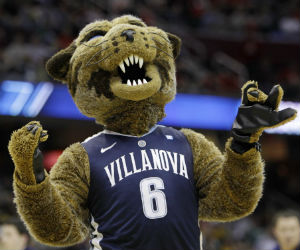 The Villanova wildcat mascot urges his team to victory.

LOS ANGELES, CA (Catholic Online) - Villanova University (RPI 4) currently leads the pack 14-2 in their conference, with a 26-3 record overall. Just two games remain in the Wildcats' season before the post-season tournament, both against opponents they have beaten previously.

On March 6 they will play Xavier University which they beat 81-58 back in Feb. 2, and on March 8 they will end their season with a home game against Georgetown University whom they beat back on Jan. 27 65-60.

The second big contender for a conference championship is Creighton University (RPI 8), which sits at 13-3 in conference and 23-5 overall for the season. They too have two games to wrap up their season, also against teams they have previously beaten.

On March 4, they will travel to Georgetown, which they beat 76-63 on Jan. 25. The Bluejays will wrap up its season against Providence on March 8. Their last match with Providence was on Jan. 18 but ended up a 68-81 loss.

Though the standings seem to favor Villanova, the team came away the worse for wear during their last two matchups against Creighton, with both games having more than a 20-point deficit. The Jan. 20 game was a 96-68 win for Creighton, who also dominated 101-80 on Feb. 16.

Xavier (20-10) is third with a 10-7 conference record and the March 6 game against Villanova will end their season.

Providence (19-10) and Marquette (17-12) are tied for fourth with 9-7 conference records, both teams will play March 4 to break their tied status. Providence is more likely to bump Xavier from third and will play Creighton on March 8, which they beat 81-68 during their last matchup. Marquette will play St. John's that same day, which beat them 75-59 on Feb. 1.
Eager to take over the fourth spot is St. John's University (19-11) who sit fifth with 9-8 in their conference. If Marquette loses both of its games, then St. John's will be able to compete with Xavier for the number four spot.

Georgetown has the roughest last two games. They play Creighton at 4 p.m. and Villanova March 8. Seton Hall will take on Butler for its final March 8 game; Butler beat Seton Hall 64-57 when they last met up. March 6 will also see Butler take on DePaul, their last match up was a 99-94 double overtime win for DePaul on Jan. 9.