SAINT ATHANASIUS: Defender of the Faith

The Bishop and Doctor of the Church whom we honor today in the Roman Catholic Liturgical Calendar was called the Defender of the Incarnation. This title summarizes a life given over to defending the central Christian claim - about who Jesus is and who we can be - during a time in the Church when the fullness of the Gospel claim was under ferocious assault. 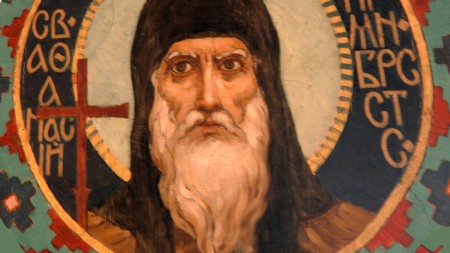 Like most of the great heroes of the earliest centuries of the Church, his writings, homilies and discourses came out of his tireless efforts of refuting nascent heresies which arose in the early centuries of Christianity. These errant doctrines, even if held by some seemingly good Christians, threatened the deposit of faith handed on by Jesus, to the Apostles, to be passed on to us.

Athanasius was an Egyptian Christian who spoke and wrote Coptic and Greek. After becoming a Christian, he was tempted to follow Arianism. Thank God, he realized there was a serious error in the teaching of the Bishop after whom the error is named.

While still a deacon, Athanasius accompanied his Bishop to the Council of Nicaea in 325 A.D. There, the young Deacon played an historic role in helping to formulate the great Nicene Creed which has served the Church of Jesus Christ for millennia, protecting the truth revealed in Jesus Christ for the whole world.

Three years after that great Council, he became the Archbishop of Alexandria and all of Egypt. His continued defense of the meaning and implications of the Incarnation of Jesus Christ led to his own exile, five times, at the hands of other Christians who had succumbed to the errors of the Arian error.

At the root of the controversy was the very meaning of the Incarnation of Jesus Christ. For many of my readers, the very term Incarnation may seem to be "too theological". For others, they associate it with the nativity or birth of the Lord. However, it means so much more. The Incarnation began when the Word became Flesh. It began at the conception of the Lord and continues.

This tendency to dismiss the fullness of the meaning of this utterly beautiful and astounding claim of the Christian faith may help to explain why the importance of the work of this great Christian is often unnoticed.

So, as we begin, let me share a quotation from the writings of an earlier hero of the Church who had also spent his entire life defending the seminal doctrine of the Incarnation another great Bishop and defender of the Faith, Irenaeus of Lyons:

For that which He [i.e. Christ] has not assumed He has not healed; but that which is united to His Godhead is also saved. If only half Adam fell, then that which Christ assumes and saves may be half also; but if the whole of his nature fell, it must be united to the whole nature of Him that was begotten, and so be saved as a whole.

The author of the New Testament letter to the Hebrews (Heb. 4:15) affirms that the Word, the Second Person of the Blessed Trinity, Jesus the Christ, became like us in all things but sin. In the Incarnation, Jesus assumed the entirety of our human condition in order to redeem the whole person, and to create us anew in Himself. (2 Cor. 5:17)

The Fathers of the last great Council of the Catholic Church, Vatican II, addressed the profound mystery which the Incarnation of Jesus Christ reveals with this beautiful exposition found in Paragraph 22 of their Pastoral Constitution on the Church in the Modern World (Gaudium et Spes):

The truth is that only in the mystery of the incarnate Word does the mystery of man take on light. For Adam, the first man, was a figure of Him Who was to come, namely Christ the Lord. Christ, the final Adam, by the revelation of the mystery of the Father and His love, fully reveals man to man himself and makes his supreme calling clear. It is not surprising, then, that in Him all the aforementioned truths find their root and attain their crown.

He Who is "the image of the invisible God" (Col. 1:15), is Himself the perfect man. To the sons of Adam He restores the divine likeness which had been disfigured from the first sin onward. Since human nature as He assumed it was not annulled, by that very fact it has been raised up to a divine dignity in our respect too.

For by His incarnation the Son of God has united Himself in some fashion with every man. He worked with human hands, He thought with a human mind, acted by human choice and loved with a human heart. Born of the Virgin Mary, He has truly been made one of us, like us in all things except sin.(Heb. 4:15)

As an innocent lamb He merited for us life by the free shedding of His own blood. In Him God reconciled us to Himself and among ourselves; from bondage to the devil and sin He delivered us, so that each one of us can say with the Apostle: The Son of God "loved me and gave Himself up for me" (Gal. 2:20).

By suffering for us He not only provided us with an example for our imitation,(26) He blazed a trail, and if we follow it, life and death are made holy and take on a new meaning.

The Christian man, conformed to the likeness of that Son, Who is the firstborn of many brothers, received "the first-fruits of the Spirit" (Rom. 8:23) by which he becomes capable of discharging the new law of love. Through this Spirit, who is "the pledge of our inheritance" (Eph. 1:14), the whole man is renewed from within, even to the achievement of "the redemption of the body" (Rom. 8:23): "If the Spirit of him who raised Jesus from the death dwells in you, then he who raised Jesus Christ from the dead will also bring to life your mortal bodies because of his Spirit who dwells in you" (Rom. 8:11).

Pressing upon the Christian to be sure, are the need and the duty to battle against evil through manifold tribulations and even to suffer death. But, linked with the paschal mystery and patterned on the dying Christ, he will hasten forward to resurrection in the strength which comes from hope.

In other words, the tireless defense of the fullness of truth demonstrated by St. Athanasius preserved the fullness of the truth for you and me. Whatever was not assumed by Jesus was not healed. The liberating truth proclaimed by the Church is that Jesus has assumed it all and, as a result, we can be made completely new!

Below is an excerpt from one of the discourses of our brother Athanasius for our meditation and imitation. Please, take a moment to pray. Then, ask the Holy Spirit to open up the deep meaning of this insight:

On the incarnation of the WordSt. Athanasius, Bishop and Doctor

The Word of God, incorporeal, incorruptible and immaterial, entered our world. Yet it was not as if he had been remote from it up to that time. For there is no part of the world that was ever without his presence; together with his Father, he continually filled all things and places.

Out of his loving-kindness for us he came to us, and we see this in the way he revealed himself openly to us. Taking pity on mankind's weakness, and moved by our corruption, he could not stand aside and see death have the mastery over us; he did not want creation to perish and his Father's work in fashioning man to be in vain. He therefore took to himself a body, no different from our own, for he did not wish simply to be in a body or only to be seen.

If he had wanted simply to be seen, he could indeed have taken another, and nobler, body. Instead, he took our body in its reality.

Within the Virgin he built himself a temple, that is, a body; he made it his own instrument in which to dwell and to reveal himself. In this way he received from mankind a body like our own, and, since all were subject to the corruption of death, he delivered this body over to death for all, and with supreme love offered it to the Father.

He did so to destroy the law of corruption passed against all men, since all died in him. The law, which had spent its force on the body of the Lord, could no longer have any power over his fellowmen.

Moreover, this was the way in which the Word was to restore mankind to immortality, after it had fallen into corruption, and summon it back from death to life. He utterly destroyed the power death had against mankind - as fire consumes chaff - by means of the body he had taken and the grace of the resurrection.

This is the reason why the Word assumed a body that could die, so that this body, sharing in the Word who is above all, might satisfy death's requirement in place of all. Because of the Word dwelling in that body, it would remain incorruptible, and all would be freed for ever from corruption by the grace of the resurrection.

In death the Word made a spotless sacrifice and oblation of the body he had taken. By dying for others, he immediately banished death for all mankind.

In this way the Word of God, who is above all, dedicated and offered his temple, the instrument that was his body, for us all, as he said, and so paid by his own death the debt that was owed.

The immortal Son of God, united with all men by likeness of nature, thus fulfilled all justice in restoring mankind to immortality by the promise of the resurrection.

The corruption of death no longer holds any power over mankind, thanks to the Word, who has come to dwell among them through his one body.