How likely is it Joe Biden will resign?

Free World Class Education
FREE Catholic Classes
It's likely, since he is becoming a liability to his party, but he should not be counted out.

This morning, Americans awoke to the news that Islamic State terrorists performed two suicide bombings in Kabul, killing tens of people and injuring hundreds more. United States Marines were among the dead. 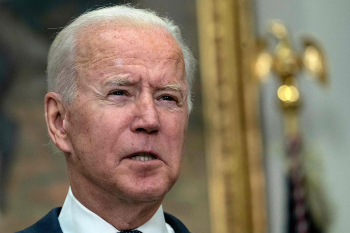 Joe Biden will face calls to resign, but he is a poltical survivor.

The situation in Afghanistan is so chaotic that several nations stopped evacuating their personnel, stranding people of many nationalities in the country. It is unknown how many foreign citizens remain in the country. The Taliban, who swiftly took the country by force, have a deadline of August 31 for all foreigners to leave the country. They are refusing to negotiate on the deadline. President Biden has agreed to meet the deadline, although it is impossible to have all Americans out of the country before time is up. He refuses to extend the deadline.

Amid the chaos at the airport in Kabul, the Islamic State, enemies of the Taliban, have pledged to attack those attempting to evacuate the country. They have succeeded.

While the U.S. has pledged retaliation against ISIS, it is unclear who is responsible for the attack and how they can be found or brought to justice. And it is unclear if the Taliban will cooperate with any investigation.

The situation in Afghanistan is best described as chaotic and out of control. It will probably take weeks to months to discern critical details and make sense of everything that is going wrong there now.

The political fallout for President Biden will be immediate. Already, he is planning to address the nation at 5 PM EDT.

While many accuse President Trump for committing to the evacuation in Afghanistan, the fact is this incident happened under President Biden's watch. As president, he could have issued any number of orders, including a unilateral repudiation of the agreement, if that is what it would have required to protect American and Afghani lives. However, he failed to do so. Instead, it appears the entire operation was botched.

The consequences will be severe. Not only are a dozen Americans dead (by present count), there is a good chance many others will perish or be imprisoned too as the attacks continue and untold numbers are left behind. The names and faces of the dead will soon be played over and over on television. And the issue will become a hot political item with Republicans sure to use it to advantage. There will be calls for investigation. With respect to the dead, the proverbial, political knives are coming out for Biden.

The question now becomes, can Biden survive this political challenge? The answer is, "unlikely." However, it is possible, since Biden is a political survivor.

Joe Biden's reputation is that of a fighter, and his career already survived two major crises. The first was when he was accused of plagiarism in the 1988 Presidential campaign. The accusation cost him his presidential bid. Yet he managed to cling to power and survived to be elected as Vice President to Barack Obama. Then, during the 2020 Democratic Party primaries, Biden performed poorly against his adversaries, despite being hailed as an early favorite. His campaign was nearly dead when he was handed a second life by Democratic Congressman Jim Clyburn, who endorsed him at the last minute before the South Carolina primaries. After that, Biden went on to become the Democratic nominee. Biden is known as a dealmaker, and has already managed to get several large bills passed, although with compromise.

His ability to survive ensures he can weather even the present circumstances, but his odds of reelection are assuredly diminished. The Democratic party establishment must also consider his a liability at this point, both because of his age, his gaffes, and now because of Afghanistan. Even his supporters are shocked at the developments.

At this point, most political experts predict Republicans may take both the house and the Senate in the midterm elections. And they could vote to impeach him once in office. And the names of those killed in Afghanistan, a disaster which continue to unfold and may become much worse, will haunt him come election time. The Democrats will be faced with a difficult choice to re-run Biden, or to replace him with another candidate.

If Biden is a true public servant, he will take responsibility for what has happened and resign. However, if he is merely another career politician interested in his own name and power, he will cling to office as long as he can, even after it becomes clear he cannot hold it.

Time will tell. In the meantime, hundreds of people remain in Afghanistan, and their lives are in peril. It is unclear if Biden has a workable plan to rescue them. For now, we pray for the dead, and for those in danger.