Is America about to collapse?

Free World Class Education
FREE Catholic Classes
Is this the end? How should we respond?

As violence spreads across the United States, an overwhelming sense of helplessness is growing. It is obvious we are living in unprecedented times. As cities burn, and unrest spreads to even small communities, some ask, "Is our Republic about to collapse? How are we to respond from a place of faith?" 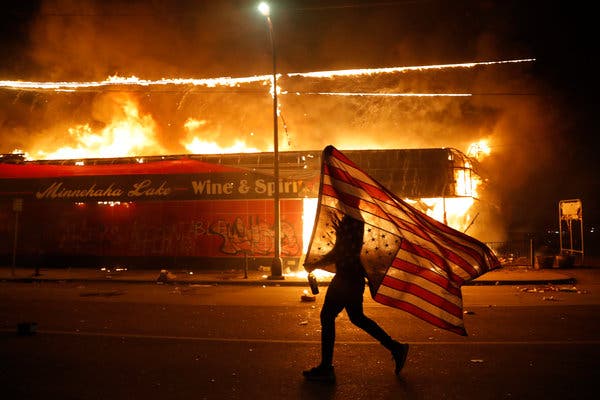 A protester carries the American flag upside down, a symbol of distress as Minneapolis burns.

LOS ANGELES, CA (California Network) - Under no circumstances can abuse, brutality, and theft be condoned. This needs to be stated up front. As Catholics, we are invited to call for justice, and peace alike. Indeed, that's what many of us are doing, and did this last Pentecost Sunday at Mass. We must continue to offer these prayers for peace and calm.

But there is a sense of foreboding, and a question of what happens after this? What's next? The answer is found in the history books, and it depends on how we respond.

America is in the throes of a revolution. Although unthinkable for many, this is beyond question. Revolutions follow patterns, as discovered by the historian Crane Brinton who wrote "The Anatomy of Revolution." But revolutions aren't always inevitable, and even from the current state, recovery is possible, even probable. But the correct steps must be taken.

In the United States, an extended cornavirus lockdown has exacerbated passions, and left some 40 million Americans unemployed and unsure of how they will pay rent and buy food. So far, a generous unemployment subsidy is helping many to survive, but without Congressional approval those benefits will expire in sixty days and millions will suddenly find themselves homeless and hungry. However, this scenario is improbable, as Congress is likely to act to extend benefits and enact policies to put people back to work.

The current unrest is inspired by the murders of black citizens by police officers who appear to be reluctantly held accountable by public authorities. While some can argue with statistics and whataboutism fallacies, it is the perception that is key. For most people, perception equals reality, and this is important to understand. Millions of Americans perceive the police to be corrupt actors who are tainted by racism. Unless this perception can be reversed, the problem will persist.

The good news is the current unrest is missing two elements needed to turn it into a genuine nightmare. The first is there is no voice on the left organizing the disaffected there. There is no Lenin-type figure to rally and lead the people. This is a blessing for those who love America. Revolutions are born of hope, and if someone emerged on the left who was capable of delivering an eloquent speech, the calculus could change overnight.

The second element is violence. By this, it is meant an inept government response that exacerbates the crisis. One example would be a governor ordering the National Guard to fire on protesters with live ammunition. The result would be catalyzing like the Boston Massacre. So far, violence from the authorities appears minimal, even if social media suggests it is routine.

Such action would certainly quell the riots and end the protests, but it would drive the militant underground where they would likely resort to domestic terrorism.

The solution to this crisis is to either allow the riots to burn themselves out, or announce a series of substantial, rapidly enacted concessions that will pacify the angry. Now is the time for celebrities, especially black leaders and influencers to appeal for calm. The President needs to address the nation and offer hope.

Concessions work. They saved Germany from socialism in the 1870s, and the United States during the Great Depression, and in the Civil Rights era. In this case, they appear both reasonable and hopefully, inevitable.

In the meantime, the best thing we can do as Catholics is pray. Our Republic should survive. Let us pray for all who are caught up in the current unrest.