Over two decades of experience have afforded Kevin Burke first-hand knowledge and testimonies of thousands of families. Although he is the first to recognize that abortion is not solely a political or partisan issue, it is helpful during election season to recognize the very policies that are perpetuating trauma in families in order to turn this crisis of abortion around. 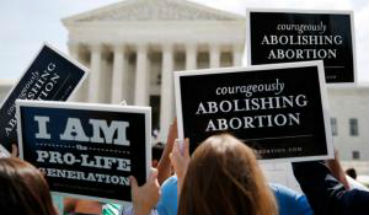 It is especially highlighted during election season that Democrats seek to help the poor, women, minorities, the immigrant, the uninsured or underinsured, etc. as part of their platform. But do their actions truly match their words? Do they truly understand that their party's position "which promotes unrestricted abortion, pushes candidates who support abortion, and punishes those who don't -only add to the suffering of the constituents they claim to support? This is a dilemma which is widely misunderstood.

Abortion is pervasive amongst the poor and minorities. The highest proportion of abortions and repeat abortions occur in the Black community. So many abortion clinics are disproportionately located in poor and minority neighborhoods. Introducing abortion into situations besieged with absent fathers, and more vulnerable children, will only exacerbate problems. Traumas involving sexual abuse and family dysfunction are made even worse by abortion. So is one's ability to parent. This, in turn, will put children's safety or education at risk. We are talking about a horrible and perpetual cycle of generational abuse, which started with slavery. Abortion is not a solution. It is never an answer to a problem. The violence of abortion only worsens and disrupts families. We need nonviolent solutions instead.

It may very well be non-malicious ignorance of these issues, but when progressives argue we need to expand "women's rights" and pass more laws to increase access to abortion, abortions increase. As abortion increases, so does the breakdown of families, rising healthcare costs due to abortion's numerous complications, and interrupted education. The party system which funds candidates who uphold abortion are undercutting their own goals to diminish poverty. Those who are in the business (or ministry) of helping the indigent- regardless of which party they affiliate with- need to understand the deep effect of abortion and how it actually feeds into the cycle of poverty.

Furthermore, abortion trauma is often accompanied by substance abuse. Numerous studies are clear that abortion is experienced as traumatic loss. Many woman and men feel its impact immediately and try to deal with those painful feelings by trying to bury them with substance abuse. Others do not recognize the loss right away or believe it was the right decision, but on a deeper level they do experience a loss. That is because, even though she may not be conscious of it, when a woman is pregnant, her body is gearing up to protect the child- even if her mind isn't. Her body is not prochoice. Her body is working to protect that child and her heart has begun to develop a relationship with that child. After abortion, the psyche experiences a loss. Although some may feel immediate relief, they might party more, drink more and are more susceptible to promiscuity that might lead to more abortions. A lot of energy has to go into denying that impact and repressing those symptoms. They sometimes come out in auto-immune dysfunctions. Additionally, women who have had abortions are at higher risk for breast cancer, depression, anxiety, and more. The bibliographies of research continue piling up, showing these correlations and higher incidences of pathology in women who abort versus those who carried to term.

Candidates who cloak abortion under the mantle of women's health or as a solution to poverty or a benefit to the family need to look at these issues honestly. It can no longer be said that a politician is fighting for women's health or for the poor or for minorities if he or she ignores the damaging after-effects abortion has on all of these. Abortion creates social, emotional and physical damage.

And there's more. It's important to recognize that abortion's influence is more far-reaching than the damage to the mothers and fathers. Voters must think of the implications on the entire family and society in general when we consider the shockwaves of abortion. We are witnessing, for example, "helicopter" parenting from those who are wounded and feeling anxious about their parenting. We are witnessing "snowflake" children who must be protected from hearing things that offended them. Why are they like that? Because many of these children know they had siblings who were killed by abortion and parents who, in their apprehension, did not deal with the issue. If we understood how deep the problems go into our cultures and our families, we would recognize it for the mental health emergency it is in our community.

Abortion-minded politicians would do us all a favor to stop seeing abortion as a solution. People who advance abortion in the voting booth are advancing physical, emotional and psychological harm on our culture. Instead, pro-life voting helps to advance strong, healthier families, promote real women's health, avoid increases in substance abuse, and prevent suicide and rising health care costs. Voting pro-life is a vote for the vulnerable, both inside and outside the womb.