A group of journalists and members from Aid to the Church in Need (ACN) went to the Nineveh Plains for the first time since ISIS blew through. What they found was heartbreaking. 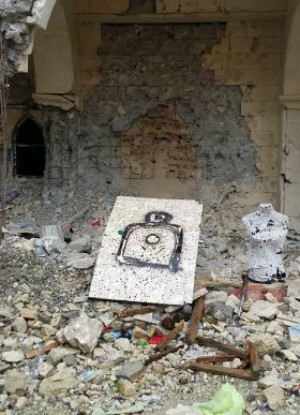 LOS ANGELES, CA (Catholic Online) - ISIS has been slaughtering people across the globe and desecrating holy grounds. Their hatred knows no bounds and even after they vacate an area, the pain they leave behind lingers.

ISIS occupied the Plain for over two years, during which time they killed all who remained and desecrated Christian churches and artwork.

Take the Lent quiz now!
The humanitarian group and journalists discovered a beheaded statue of the Holy Virgin, a painting of Christ crushed on the ground, several sacred items used for target practice and desecrated graves, tombstones, shrines, monasteries, churches, homes and shops.

Evidence of fires and senseless killings were everywhere.

Alessandro Monteduro, the ACN director for Italy, and Monsignor Francesco Cavina, the bishop of Carpi, paid a visit to the site only days ago.

Mortarts were left by the terrorist group, shops were looted and burned to the ground and churches were completely destroyed.

Louis Petrus, a security guard, told Aid to the Church in Need, "I don't understand how people can harm each other so much. Look at my house: it is damaged, most of my furniture has been stolen and my household effects are broken.

"Other inhabitants of Qaraqosh had prepared me for what I would find in the city. I had heard stories and seen pictures of the destruction caused by the jihadists. Now that I am seeing the city with my own eyes, I do not know what to feel. The terrorists have destroyed a lot of my possessions."

Father Sharbil Eeso, a 72-year-old Syrian Catholic priest, also returned to Qaraqosh near the end of January. His seminary was a mess and ISIS had brought down ceilings and statues in search of hidden treasures.

"We are not allowed to clear up the mess yet," the priest lamented. "[F]irst the damage needs to be assessed carefully and documented thoroughly, and that can only start when the city is safe.

"Las week, a jihadist emerged from the tunnel system which ISIS has built underneath the city. The army immediately shot and killed him: it was a 13-year-old boy."

The walls of churches in Qaraqosh had battle instructions scrawled onto the walls and St. George's Syrian Catholic Church was used as a bomb factory, with several sleeping weapons still waiting in the building. 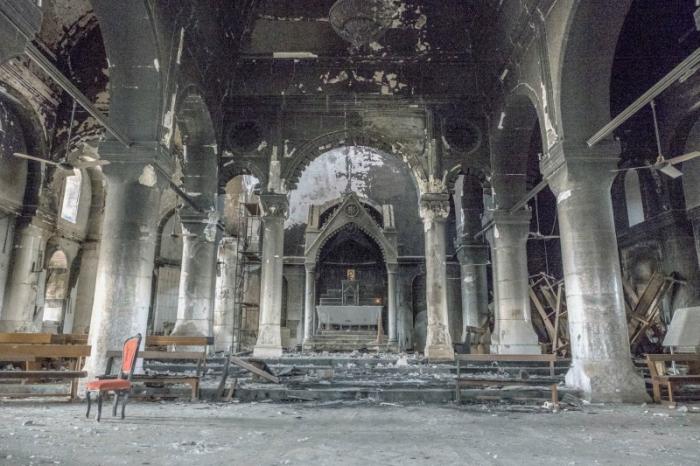 Inside the Church of the Immaculate Conception in Qaraqosh, Iraq.

Rogationist Fr. Jalal Yako looked at what was left of his church and sadly stated, "the church is destroyed by such wickedness..."

Nisan Karromi, the mayor of Qaraqosh, explained: "We really want to return to Qaraqosh with our children [but] it will be a long time before all damages will be repaired.

"We not only have to reconstruct and rebuild this city, but we also have to compensate the people for the damages they have suffered. Now that the Iraqi government is in crisis, the international community will have to help make Iraq habitable again."

Manal Matti, a resident who went to visit the burned-out church of the Immaculate Conception, admitted her surprise at the number of mannequins spread across the area with obvious bullet holes through them.

"The jihadists used the church as a shooting range, and the mannequins as targets," she said. Her beauty salon shop was only a few steps away from the church before she was forced to flee.

She stated: "I do now know when I will ever be able to see the inhabitants of Qaraqosh coming again to my beauty salon."

Journalists and members of the ACN shared the most damaged villages of them all were Batnaya and Telleskof, where 170 previous residents have slowly started to trickle back.

Houses, churches and the local infrastructure must be rebuilt before residents can move back permanently.

In the face of graffiti, rubble, desecration and pain, the first Christian village to recover from the invaders proudly proclaimed "Victory! Victory!"

The Chaldean patriarch of Baghdad, Mar Louis Sako, warned: "This Cross is saying to the world that this is our land. This is where we were born and this is where we are going to die."

The people may have been run out from their homes but nothing can stop them from returning, rebuilding and standing strong with help from God.