A map of Ukraine shows a major escalation in the conflict between ethnic Russian proxies agitating for independence from Ukraine. The escalation, along with other reports, suggests the Russian invasion has begun. 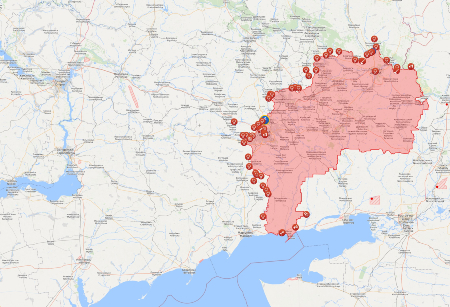 A Livemap view of the incidents in Ukraine.

Russian forces have been posturing for months, and to a lesser extent years. But now, they are poised to attack, and according to intelligence reports, may already be cleared to do so.

President Biden on Sunday reported that Russian President Vladimir Putin already issued the order to his generals to attack Ukraine.

Consistent with this, the Russian media is reporting that Ukrainian forces attacked across the border, and have killed as many as five people. The reports are unverified, and could be false. Meanwhile, the conflict monitoring website, LiveMap shows 84 violations of the ceasefire between Ukraine and separatist forces in the east. The separatists, supported by Russia, are firing artillery shells at Ukrainian positions. Such bombardments are typical before an attack, although the intensity of the present bombardment is more suited to harassment than an all-out attack.

Other signs of war are curiously absent. Air and missile strikes are absent. The skies are relatively quiet.

The outcome of this conflict is already decided. The Russian separatists will have their own country soon. The Russian military is much larger than the Ukrainians, and is well-equipped. They outclass the Ukrainian forces in every capability. The west is supplying Ukraine with improved weapons, and these should inflict losses on any Russian forces that invade, but even with such firepower, the outcome isn't in doubt.

The global community is pledging to respond to Russia with strict sanctions, but these are unlikely to produce the impact they hope.

Talks over the situation have produced no meaningful results with some arguing the talks are merely a stalling tactic by Putin.

With the situation in little doubt, it may be time to negotiate a solution that will at least avoid further conflict. That said, those guilty of fueling this conflict ought not go unpunished. Trade sanctions and other consequences ought to be imposed to discourage future behavior.

When the fighting does begin in earnest, many lives will be lost, and much will be destroyed. Let us pray for peace, and that nobody be killed over a line on a map, or the pride of one world leader or another.