The risk of a strike against North Korea appears to be diminishing as the drumbeat of war fades. A message from a U.S. Navy rear admiral to the families of the U.S.S. Carl Vinson suggests the fleet will soon return to its schedule. Meanwhile, South Korea has asked Donald Trump not to strike North Korea at this time. 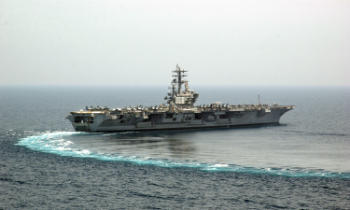 The aircraft Carrier Ronald Reagan (CVN76) performs a turn at sea. The U.S.S. Carl Vinson (CVN 70) is keeping the peace in the Western Pacific at this time.

LOS ANGELES, CA (California Network) -- It appears that a global crisis has been averted on the Korean peninsula. Donald Trump may be backing down from an apparent threat to strike North Korea, should they test a nuclear device or rocket on the "Day of the Sun," this April 15. Trump may be backing down chiefly because South Korea has asked him not to strike Kim Jong Un.

The South Korean government and people are terrified of war with the North. The capital, Seoul, lies well within rocket and artillery range of the North. Should Trump order a strike against the North, even a limited strike, artillery would certainly fire on the civilians in the capital.

An all-out war with the North would go badly for the South, which has a much smaller military. The U.S. and Japan would send critical assistance, striking Northern forces from the air, but it would take a few days before these strikes could seriously blunt the North's invasion.

Most experts agree the North would ultimately lose a second Korean war, but the conflict would be bloody.

South Korea has publicly asked Trump to obtain their permission before launching any strikes.

Following the veto from South Korea, a message was posted to a Facebook group for families of the U.S.S. Carl Vinson from Rear Admiral Jim Kilby, the commander of the strike group that was redirected from Singapore while en route to Australia. A line in the message is telling: "We plan to return on the same timeline and can't wait to return home."

Reading between the lines suggests the fleet does not plan to see combat and instead will return to its previously planned schedule.

While these changes take place, North Korea appears ready to test a nuclear device on or about April 15, which is their Day of the Sun holiday. The Day of the Sun celebrates the birthday of the nation's founder, Kim Il-sung. Traditionally, a major military parade is held in Pyongyang, and tests of new weapons are carried out.

With a nuclear test imminent, but the U.S. backing off a military strike, the only options left are sanctions. Critical to those sanctions is China, which is the North's primary trading partner.

China has become weary of Kim Jong Un's antics over the past few years as well as the constant stream of illegal refugees streaming into China. In anticipation of conflict, China dispatched 150,000 troops to the border in the event of a refugee crisis. It appears these forces won't be needed.

While high government officials are exasperated with the North Korean regime, their halfhearted policies have been permissive. But Trump and other nations have made it clear that the next step with North Korea is a military option. The United States and Japan simply cannot tolerate North Korea possessing long-range ballistic missiles.

If the Chinese government wishes to avoid further Western intervention on the peninsula, then it needs to rein in North Korea. The West is out of options and time.

What happens next week will be a make-or-break moment for China. If the Chinese government can control Pyongyang, then the prospects for long-term peace will be strong. But it is more likely the North will continue to defy the world and will pursue their goal of developing a nuclear ICBM capable of striking the United States.

Such a capability is unacceptable. Analysts fear they could possess it in as little as two to three years. Before that happens, the U.S. will have to strike North Korea.

It seems the United States will back down, this time. Next time, there might not be a choice. China has a final chance to get tough on their rogue neighbor. In the meantime, rest assured U.S. military planners will be working on a full-scale attack plan, should the North continue nuclear weapons development.

"He that does not strike first will be the first struck." --Roman proverb

"I'm going to plead with you, do not cross us. Because if you do, the survivors will write about what we do here for 10,000 years." --Sec. of Def. James Mattis

CSG-1 Families and Loved Ones,

I want to start by thanking you for your continued support of our Sailors as we continue on our deployment and thank you for all you do while we are out to sea. Your support of the Sailors back home is an integral and crucial part in making the Navy the strongest and most flexible Navy in the world. We couldn't do this without you, thank you.

Next, I want to ensure you know the safety and security of your Sailors is my number one priority. Your Sailors have performed at an exceptionally high standard of safety and performance throughout this deployment, and I don't expect the quality to diminish anytime soon. As being a flexible force for our nation's leaders, we answer the call when directed. The world has a vote of where we go and what we do. We received direction to provide presence in the Waters off the Korean Peninsula as a demonstration of our flexibility, capability, and dedication to our Indo-Asia-Pacific partners.

Finally, know that you have support in the Family Readiness Groups and Ombudsman Groups of @CCSG1, CVN-70, CVW-2, CDS-1 and all subordinate commands. Your @U.S.Navy Sailors make this carrier strike group the most powerful force of the Navy, and they couldn't do it without your support. We will keep you apprised of changes as soon as we know and when we are authorized to communicate them. We plan to return on the same timeline and can't wait to return home.