Young missionaries bring the Gospel to prisoners in Chile

A youth ministry group in the central Chilean Diocese of Talca spent the week of Jan. 27 - Feb. 1 doing prison ministry at a local men's prison. 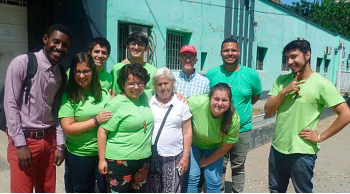 Nine young people with the Mercy Action youth group volunteered at the Penitentiary Prison of Talca for the week.

Led by Deacon Guido Goossens, they began each day with prayer and then traveled to the prison, where they offered a morning catechetical activity on a specific theme and a recreational activity in the afternoon based on the morning catechesis.

They stayed overnight at a nearby Catholic school, where they also ate. After the day's ministry, they returned to the school to share their experiences and to prepare spiritually for the next day.

NicolĂˇs ZĂşĂ±iga Contreras, who participated in Mercy Action for the first time, shared his experience with the prison ministry.

He told the Diocese of Talca, "It was a very enlightening experience, which took some courage. I came with a lot of prejudices based on the fact that [these inmates] are in prison, for whatever reason, but we're going to get them out of their routine and help get them assimilated into Catholic life again."

"I've gone on mission in other circumstances but this one has been the most meaningful," he added. "I felt I needed to do something different, and here I felt like I was making a contribution, like a piece that was missing from a puzzle."

The Mercy Action mission concluded with a Mass at the prison celebrated by the Apostolic Administrator of Chile, Bishop Galo FernĂˇndez.

Mercy Action also does prison ministry during the rest of the year, and is part of MisiĂłn AlĂ©grate (Rejoice) of the Talca diocesan youth ministry.