The Baby Saves the Mother!

Immaculate Conception -- the solemnity itself, December 8, and beloved manifestation of the National Shrine of the Immaculate Conception in Washington, D.C. call to mind many wondrous features of the Mother of God in the mosaic of chapels dedicated to her as the pride of many nations and titles honoring. 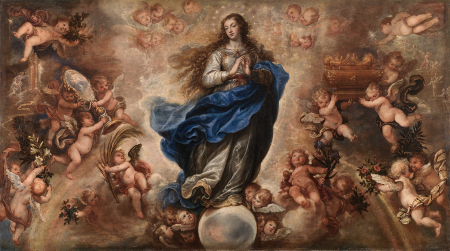 There are emerging stories from the past similar to this one, which I first read about in the American Life League newsletter of December 1988:

In 1947, a Nova Scotian woman was suffering from tuberculosis to the point that she was practically given up for certain death. The doctor discussed removing the vertebrae to relieve the tensions and lesions in the lung, a rather primitive, but common method in those days. In consultation, the doctors became aware that she was pregnant, but dismissed the idea of an abortion, as they felt it would've killed her. Apart from this, if they could get pressure against the lower lobe, they could hope to force the TB cavity shut.

But things grew grimmer. Then the difficult task fell to the doctor who told her medical science "had gone as far as it could go," and that her Creator "now had the final verdict, and that it would not be necessarily what either of us wanted, but would be the best for her under the circumstances."

Amazingly, she was still alive on a brief respite home from the hospital on Christmas Eve, but just barely. When she returned "the cavity was still growing." In the New Year, her signs deteriorated further, but she kept on living.

By late spring, an incredible thing happened. She began to eat and gain weight. A chest x-ray showed the growth of the TB cavity had stopped. Not long after, another x-ray showed why: The diaphragm was pushing up against the lobe of her deceased lung to make room for the child she was bearing. Nature was doing what doctors failed to do; it was pressing the sides of that deadly hole together. The child was saving the mother!

Ultimately both would leave the hospital in good health. The doctor would receive Christmas cards from the mother each year, an annual reminder and renewal of God's miracle of life. They were both saved, and the baby was the human cause of her mother's salvation.

Some 2,000 years ago God in his infinite mercy saved One above all, in all of his creation, in a particular way, by granting her the extraordinary privilege of her Immaculate Conception. There may be other theological ways to describe the divine favor for Mary as she was conceived but certainly it seems feasible to say that, in an even greater way than the Nova Scotia case, the baby saved the life of the mother.

For the son of God to be conceived in a human womb, the mother herself would need to be perfect, stainless, immaculate from her first moment of conception, the very start of her existence. It was nature's design of a baby directing the pregnancy of the mother, not the other way around.

"Let it be done to me according to Your word," was Mary's response to this years later in the Annunciation. Mary became God's most favored, beloved, perfect instrument, of obedience, and trust. "And the word became flesh and dwelt among us."

Only through Mary's womb would the baby emerge on the path to redeem the rest of us at Calvary, but already years earlier she had received the sublime gift at her very conception. Exempt she was from original sin as eternally foreseen in the Divine plan.

Today, when our national cultural climate of the autonomous woman clutches onto a satanic "Choice" we can rejoice in this very significant pro-life feast of Mary's unsurpassable honor bestowed on her by her baby years before he would enter her precious womb.

Mary's Immaculate Conception also reminds us that God's chronology may not fit ours, but his design is perfect. All is in anticipation of salvation.

As we in the groundswell of pro-life efforts celebrate Advent in anticipation, it is good to reflect that the Divine Baby saves-or rather, "gifts"-the life of the Mother in that every unique way we joyfully commemorate today, with other Catholics and Christians: Our Lady's Immaculate Conception.