A Christmas Star to Light to Way to End Oppression

From now till Christmas, people all over the world will be searching the evening skies for the "Christmas Star." 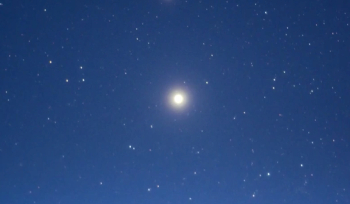 What they hope to catch a glimpse of is actually the planets Jupiter and Saturn, which will be visible closer than they have been to each other since the 13th century. But just the mention of the Christmas star will likely prompt people who aren't necessarily Christian - just curious - to type "Star of Bethlehem" into their favorite search engine to find out more about the celestial event to which this planetary alignment is being compared.

This heavenly occurrence is perfectly timed to remind us of a universal truth: Christmas is for everyone.

Christ the Savior becomes man precisely for all who share human nature. He excludes nobody. The good news of Christmas is for all people of all times and places. "Joy to the world." In fact, so universal is this joy that even nature shares in it: "Then the wolf shall be a guest of the lamb, and the leopard shall lie down with the kid; the calf and the young lion shall browse together, with a little child to guide them" (Isaiah 11:6).

All of this leads to an inescapable conclusion: Christmas is also for the unborn. The Savior has come also for the children yet living in their mothers' wombs. The Gospel message is addressed also to our youngest brothers and sisters. In fact, we can say it is addressed especially to them because they are the most helpless.

The good news of the Gospel was announced first to the lowly, not to the great and powerful. In Luke 2: 8-14, we read the famous account of the angels appearing first to the ordinary shepherds.

And there were shepherds living out in the fields nearby, keeping watch over their flocks at night. An angel of the Lord appeared to them, and the glory of the Lord shone around them, and they were terrified. But the angel said to them, "Do not be afraid. I bring you good news that will cause great joy for all the people. Today in the town of David a Savior has been born to you; he is the Messiah, the Lord. This will be a sign to you: You will find a baby wrapped in cloths and lying in a manger."

Suddenly a great company of the heavenly host appeared with the angel, praising God and saying, "Glory to God in the highest heaven, and on earth peace to those on whom his favor rests."

The ministry of the One who was born for us continued to follow that pattern: He consistently made special room for those who were on the outskirts of society. He broke down false barriers between different classes of human beings. He saw their humanity, and the image of God inscribed on them from creation.

This image is not obscured by the false distinctions people make by their prejudice or by the customs that deny the equal dignity of all people. Hence we see Him reach out to children despite the efforts of the apostles to keep them away (Matthew 19:13-15); to tax collectors and sinners despite the objections of the Scribes (Mark 2:16); to the blind despite the warnings of the crowd (Matthew 20:29-34); to a foreign woman despite the utter surprise of the disciples and of the woman herself (John 4:9, 27); to Gentiles despite the anger of the Jews (Matthew 21:41-46); and to the lepers, despite their isolation from the rest of society (Luke 17:11-19).

The Church continues Jesus' inclusive ministry today, not failing to take a preferential option for the poor. The "poor" are not simply those deprived of material goods. The poor are those who are marginalized or who have no defense. They are those who cannot help themselves, those who might only have only God...and God's people.

To welcome the Savior means to welcome the obligations which His mission places on us. He is, in the words of the Prophets, one who will establish "justice" on the earth. In Biblical terms, this indicates He will intervene for the helpless, bringing deliverance to those held in bondage. That's all of us, of course, subject to the bondage of sin and death, unable to save ourselves. But it's especially our brothers and sisters in the womb, subject to the additional bondage of a Court decision that said, "The word person...does not include the unborn." (Roe vs. Wade, 1973).

In the beautiful Christmas hymn, "O Holy Night," we sing these words. "Truly He taught us to love one another; His law is love, and His Gospel is Peace. Chains shall he break, for the slave is our brother, and in His Name, all oppression shall cease."

My prayer is that the "Christmas Star" in our sky this week will serve as a reminder that Christmas cannot be complete until we join in the great effort -- pastorally, educationally, and politically -- to end the oppression of the unborn once and for all. In the merciful and loving example of our Lord, let us make room for them, too. May the whole world be included in the hearing of the good news that a Savior has been born.