Since when did Halloween become a Christian holiday?

Free World Class Education
FREE Catholic Classes
Why is this holiday so uncomfortable for Christians?

If there's one holiday Christians might like to skip, Halloween is probably the most common choice. It's dark, macabre, celebrates evil, and encourages vice. If not for the kids who look forward to buckets of free candy, most of us would be happy to let it pass unobserved. But does Halloween have a bad rap? Or is the condemnation deserved? 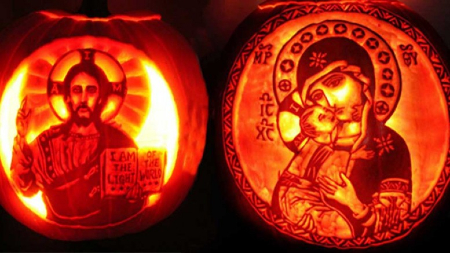 LOS ANGELES, CA (California Network) - Halloween is one of the most problematic holidays for Christians. It doesn't take much to see why. The theaters and televisions celebrate darkness and evil, encouraging people to revel in things like witchcraft and murder. The costumes are either gory or ghoulish, or in many cases "sexy" which simply means pornographic. And revelers often use the holiday to lampoon figures that are entitled to respect, such as priests and other religious, (for some, this can be a violation of the Fourth Commandment). As for children, it's about hoarding as much candy as possible, encouraging gluttony and greed, not to mention it's unhealthy. And for teens and young adults, it's an occasion for vice.

The holiday deserves its poor reputation. Worse yet, the holiday has Catholic roots, and non-Catholics often seize upon these concerns and use them to smear the Church, ignoring the history and going directly for the equally absurd pope = antichrist argument.

So, what's the history of this holiday, and what should we as Catholics do?

Halloween is related directly to the following day, which for Catholics and some other Christians is All Saints' Day. On that day, November 1, the faithful are called to pray and acknowledge the saints in heaven. Anyone who makes it to heaven is a saint. That is the goal of each faithful person, to be united with God in perpetuity, to be a saint. The Church recognizes a tiny portion of the multitude who must surely be in heaven by virtue of a process called canonization. However, the number of saints in heaven is surely much greater.

On all Saints' Day, we call to mind the saints as examples of virtue and how to be. We are to be inspired by them, invigorated with new life. Much like a child is excited when they see a movie featuring a superhero and want to be just like the character they see. We should likewise endeavor to emulate these saints. And we pray, asking the saints to intercede for ourselves and for those in Purgatory.

Halloween gets its name from "All Hallow's Eve," which is the night before All Saints' Day.

The history of Halloween is deep, rooted in ancient pagan traditions, themselves dating back to the centuries before Christ, and perhaps even to prehistoric times. The Church, in an effort to evangelize the pagan Romans and others, replaced many pagan celebrations with Christian observances. This was often done in a way so people could understand the connections between their pagan errors and the Christian way of being. And many of these celebrations were consolidated into the observances that became All Saints', All Souls' and Halloween. One modern example of this practice is the "Day of the Dead." Celebrated at the same time, the Day of the Dead incorporates indigenous traditions with Catholic practice. None of this should be interpreted as the Church sanctioning or incorporating paganism into its dogma. Such ideas are anti-Catholic falsehoods.

For centuries, Halloween was celebrated by children in the Church, with kids going door-to-door, asking for alms. Often, children might dress as a saint, or an icon might be carried and displayed at each location. The modern practice of trick-or-treating is inspired by this old practice.

Sometime in the early 20th century, Halloween became a popular occasion for young adults who wanted to play pranks. But unlike many viral meme movements, this one did not die out with time. Instead, pranks tended to become more violent and dangerous over the years, with youths committing acts of vandalism and harm. Such behavior had little to do with the traditions of the Church or Christianity, and much to do with mischief and mayhem. By the 1950s, public officials around the world figured out how to tame the holiday by turning it into a celebration centered on children. This became an occasion to sell candy, costumes, and toys, and an entire industry was born. In the decades since, Halloween has become entirely secularized, its Catholic roots obliterated by practices that have nothing to do with the original intent.

So the question for Catholics is, how should we observe the occasion? Should we even participate, given that it is entirely co-opted by secular culture?

Halloween is still popular, especially with children. There is no harm in allowing children to dress in costume and go trick-or-treating with adult supervision. Even older kids can have a good time going door-to-door, and there's no good reason to restrict kids from doing what others are doing as long as it's safe and appropriate. Likewise, there's nothing wrong with adults going to parties in costume, or watching a good scary movie. The catch is, we need to be informed by our faith when we engage in these behaviors. Our choices need to affirm our Catholic faith, not undermine it. As Catholics, we should not dress irreverently. Instead of dressing as devils, perhaps dressing as a saint or an angel is an acceptable alternative? We should keep it modest, of course. A decent costume can even inspire conversations about the faith among those who don't know, giving us an opportunity to evangelize a bit.

When we carve pumpkins, we can certainly carve ghosts and monsters, but how about saints and other symbols which remind people of the Catholic significance of the holiday?

As Catholics, we are welcome to participate fully in our cultures, as long as those practices are congruent with our faith. And we do need to take back something of Halloween for ourselves. We might not be able to reverse the cultural backsliding of the past century, but we can ensure that those in our family are familiar with the  origins and significance of the occasion.

One way we can do that is through education. Catholic Online School has a wonderful course that ties Halloween together with All Saints', Souls', and Day of the Dead, and their connection to the Christian knowledge of Purgatory. The course, Purgatory can be taken by clicking here.