A sinister reason why Catholics must not use Wikipedia

Wikipedia co-founder Larry Sanger has a warning for web surfers. Don't use, Wikipedia. Here's why. 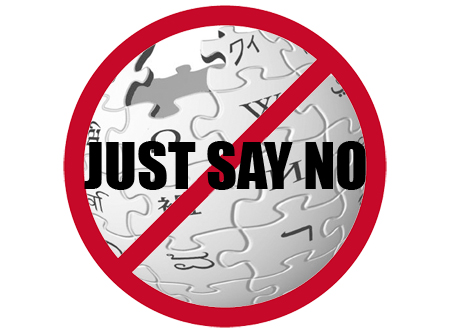 LOS ANGELES, CA (California Network) - People should stop using Wikipedia, according to its co-founder. This especially applies to Catholics.

Larry Sanger, the co-founder of Wikipedia warns Democratic-supporting volunteer editors are taking over the site and are forbidding Wikipedia users to edit pages. They are adding leftist-bias to content and prohibiting content that could be embarrassing to Democrats. Sanger mentioned the site's entry on Joe Biden, which he points out is "sanitized," and does not mention the scandals involving Hunter Biden, the President's son.

Our own check of the site verifies this shocking claim. Despite the fact the public is well aware of Hunter Biden's drug use and his relationship with his deceased brother's former spouse, the entry on Joe Biden ignores the issue.

Certainly the entry on Joe Biden should be about Joe Biden, however, his children reflect on him and his role as a parent and a figurehead. We further checked the information on the plagiarism scandal that ended his 1988 presidential campaign. That section was also "whitewashed," with the content downplaying the matter as the product of staff confusion and other whataboutisms. Such fallacies should not exist in a credible source.

Ultimately, the entry on Joe Biden is just one example of the problem. The website has become infiltrated with leftist editors.

What's wrong with leftists? While leftists have laudable positions on some issues, they also selectively apply their criteria to exclude certain groups. For example, leftists agree that "black lives matter." However, those lives don't seem to matter when they are in the womb. They want all people to enjoy a reasonable standard of living, a laudable goal. But how is this achieved via socialism? They want people to be happy and fulfilled, another laudable goal. But how is this achieved through the compulsory acceptance and participation in the sins of others?

Catholics, and all people in general, should listen to the warnings long issued by academics since 2001, that Wikipedia just isn't a reliable source. Anyone can edit a Wikipedia entry. However, these entries are reviewed by volunteer editors who have the power to add, subtract, change, or reject any and all edits.

If those editors become politically compromised, then the entire work is suspect.

Knowing this, anyone who continues to use Wikipedia is using a biased source and becomes responsible for the consequences of the information they consume, share, and support. As Catholics, we are not supposed to lie, or to participate in lying. The very definition of scandal is to cause others to sin. If we share information that "whitewashes" the behavior of sinful, unrepentant people, or information that suggests certain behaviors are acceptable, then we are engaged in scandal, which can be a serious mortal sin.

Instead, we are called to look to the Church for our answers. The Bible answers many questions, if on reads it. Likewise, the Catechism of the Catholic Church. For those who aren't sure where to start, Catholic Online School has entire courses on these topics. The school also provides answers to a great number of other questions and topics. And there are even classes like "Tough Questions," where students' toughest questions are answered by a live instructor. All the content on Catholic Online School is reviewed for magisterial integrity, so teachers and students alike know everything within is consistent with the teachings of the Church.

We have a duty to seek the truth, and to reject evil. Sadly, the sources we've been told we can trust are politically compromised and have become one big stealth campaign for evil. How we choose to respond make a big difference.

Where will you go for your answers?