Free World Class Education
FREE Catholic Classes
'It is my desire that, in this our time, by acknowledging the dignity of each human person, we can contribute to the rebirth of a universal aspiration to fraternity. Fraternity between all men and women.'

In eight chapters and over 30,000 words, Pope Francis addresses all men and women of good will with his third encyclical, inspired by St. Francis of Assisi, "Fratelli Tutti." 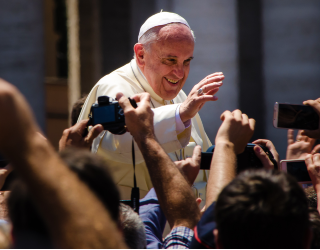 Pope Francis released his anticipated third encyclical on the Feast Day of St. Francis of Assisi.

Catholic Online (LOS ANGELES, CA) - Though it is best you take the time to read the pope's letter yourself, we will present you with five of the many things you need to know about it.

The Name of the Encyclical

The name of Pope Francis' new encyclical is "Fratelli Tutti," which translated means "All brothers." This phrase is a direct quotation from the Admonitions of St. Francis. "Let us all, brothers, consider the Good Shepherd who to save His sheep bore the suffering of the Cross." (Admonitions, 6.1).

The encyclical focuses on these two important factors. In it, the pope writes, "It is my desire that, in this our time, by acknowledging the dignity of each human person, we can contribute to the rebirth of a universal aspiration to fraternity. Fraternity between all men and women."

Pope Francis notes that the possibility for human fraternity is based in the undeniable dignity of every human being. "Social friendship and universal fraternity necessarily call for an acknowledgement of the worth of every human person, always and everywhere." If the dignity of any human, whether they live with a disability, in poverty, or lack education is threatened in any way, the idea of fraternity will remain "just another vague ideal."

In the first chapter of "Fratelli Tutti," Pope Francis names off certain trends in today's worlds that hinder this development of universal fraternity. His list includes; threats to dignity of migrants, the "throwaway culture," the COVID-19 pandemic, and aggression stemmed from digital communication.

"Some parts of our human family, it appears, can be readily sacrificed for the sake of others considered worthy of a carefree existence. Ultimately, persons are no longer seen as a paramount value to be cared for and respected, especially when they are poor and disabled, 'not yet useful' - like the unborn, or 'no longer needed' - like the elderly. We have grown indifferent to all kinds of wastefulness, starting with the waste of food, which is deplorable in the extreme."

A Better Kind of Politics

In Chapter Five of his new encyclical, Pope Francis explains that the development of a global community of fraternity calls for a better kind of politics. We need our politics to be "truly at the service of the common good."

"Lack of concern for the vulnerable can hide behind a populism that exploits them demagogically for its own purposes, or a liberalism that serves the economic interests of the powerful."

The new politics Pope Francis writes about must have charity at its core, "animated by the willingness to make sacrifices and the openness required to be truly unitive."

In Chapter Seven, called "Paths of Renewed Encounter," the Holy Father calls for a total eradication of the death penalty. "Today we state clearly that 'the death penalty is inadmissible' and the Church is firmly committed to calling for its abolition worldwide."

Pope Francis expresses, in Chapter Three, one of the mysteries of authentic human existence is that no one can "experience the true beauty of life without relating to others, without having real faces to love... Life exists where there is bonding, communion, fraternity; and life is stronger than death when it is built on true relationships and bonds of fidelity. On the contrary, there is no life when we claim to be self-sufficient and live as islands: in these attitudes, death prevails."

Therefore, the human fraternity this world needs can be nourished by a re-discovery of love.

"Love, then, is more than just a series of benevolent actions. Those actions have their source in a union increasingly directed towards others, considering them of value, worthy, pleasing and beautiful apart from their physical or moral appearances."