If it has been some time since you thought about the work of Blessed Cardinal Clemens von Galen - or if you have never heard of this 20th century cleric - this is a good time to consider his courage in the face of unspeakable evil. 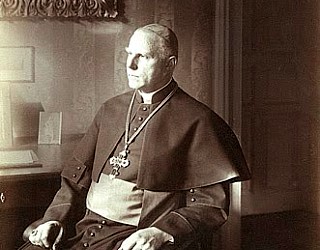 In the 1940s, Adolf Hitler turned Germany into a nation that its citizens didn't even recognize. Cardinal von Galen was a parish priest and then a bishop as the Third Reich came into power in Germany. Rather than remain silent, he spoke out against the reign of terror and mass murder the Nazis were spreading across Europe.

The cardinal "was one of the best known champions of the Church's resistance to the unjust National Socialist regime," Cardinal Jose Saraiva Martins said during the 2005 Vatican ceremony at which Cardinal von Galen was beatified.

"If we wonder where he found his daring to reprimand the Nazis publicly and with very clear arguments, since they were violating fundamental human rights, and how he managed to persevere in this denunciation, we must turn to three important factors that built up his strong personality ... These were: Family, Faith, and Politics."

Cardinal von Galen was born into a deeply religious aristocratic family, and became a priest in 1904.

Like most of Europe, Germany was a nation in transition in the early 20th century. In 1932, the far-right National Socialist German Worker's Party - the Nazi Party - became the largest political party in the German Parliament. Once Adolf Hitler was sworn in as chancellor January 1933, the Nazi dictatorship was born. He was empowered to pass laws without the approval of the German president, parliament or people.

Cardinal von Galen had a front row seat to the rise of the Third Reich. Initially hopeful that the new regime would restore Germany to its place of prominence in the world, the cardinal soon realized the Reich was a humanitarian disaster.

At the very outset of his pastoral work in MĂĽnster, Bishop von Galen unmasked the ideology of National Socialism and its contempt for human beings.

He began delivering sermons critical of the Nazi's murderous policies and disrespect for the freedom of the Catholic Church. In 1936, for instance, the Nazis in Oldenburg ordered the removal of all crucifixes from Catholic schools. When the cardinal protested, the order was canceled.

When Cardinal von Galen learned in 1941 that the Nazis had begun euthanizing the mentally ill, he delivered three powerful sermons in July and August of that year that presaged the genocidal horror that was to come in Germany, Poland and elsewhere.

"This ghastly doctrine tries to justify the murder of blameless men," the cardinal thundered in one sermon. "...Once admit the right to kill unproductive persons . . . then none of us can be sure of his life."

The BBC broadcast the sermons and the British Royal Air Force dropped copies of it all over the country. Hitler reportedly wanted to arrest the cardinal but understood the risk of harming someone so popular.

The cardinal was kept under virtual house arrest from late 1941 until 1945. Hitler vowed to take revenge on him, but died before carrying it out.

Cardinal von Galen had a deep sense of responsibility to speak out, no matter the risk. "The good Lord gave me a position that obliged me to call what was black, black, and what was white, white," he said.

His words, explained Cardinal Jose Saraiva Martins at the Cardinal's mass of beatification, "invite us to reflect on the brilliance of his witness to faith; in times that may seem less threatening but are just as problematic with regard to human life, they invite us to imitate his example."

It's no exaggeration to say that the destruction dealt to the lives of the unborn and the freedoms of the Church by the Democrat Party in the United States are indeed, in Cardinal Martins' words, "just as problematic" and require just as much of a clear and forceful response from the clergy today. Indeed, as the book and corresponding film Death of A Nation documents, the Democrat Party continues the legacy of the Nazi regime in many respects.

The Democrats place no limits on abortion, and want taxpayers to fund them. They impose mandates like the one which, under Obama, caused dioceses and other Catholic institutions to have to fight all the way to the Supreme Court to live out their faith in the workplace. Leading Democrats have indeed called for Catholics to change their beliefs, and for the Church to lose its tax-exempt status for holding those beliefs.

In fact, every one of us who believes in the sanctity of life and the rights guaranteed in the U.S. Constitution must respond like Cardinal von Galen did. We must challenge political parties, candidates, and politicians at every level of government, aware that, as both the Catechism and the Second Vatican Council declare, "it is a part of the Church's mission 'to pass moral judgments even in matters related to politics, whenever the fundamental rights of man or the salvation of souls requires it'" (CCC 2246; GS 76).

Democrat Party policies have already rendered our country nearly unrecognizable. We need to speak out before they do even greater damage.