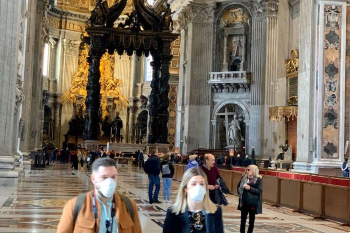 All outpatient services in Vatican City State's Health and Hygiene Department were suspended March 6 to allow for the sanitation of Vatican facilities after one patient tested positive the previous day.

"The Health and Hygiene Department is taking steps to inform the competent Italian authorities and in the meantime the planned health protocols have been launched," Holy See Press Office Director Matteo Bruni told journalists March 6.

The Vatican spokesman did not elaborate what these additional protocols will be. Many upcoming Vatican conferences and events have already been postponed until the fall to help combat the virus' spread.

With 148 coronavirus-related deaths in less than two weeks more than 96 of which have occurred in the past three days. Italy has had the most Covid-19 mortalities outside of China.

Most of the 3,858 people who have contracted Covid-19 in Italy have been in the northern regions of the country. The Italian Ministry of Health reported 44 confirmed cases in Rome's Lazio region on the evening of March 5.

The Italian government has closed all schools and universities March 5-15 in response to the outbreak.

After the pope canceled several appearances last week, the Vatican issued a statement March 3 that the pope had "a common cold," and that he did not have "symptoms caused by other diseases." According to an Italian newspaper, Pope Francis was reportedly tested for the novel coronavirus, Covid-19, with negative results.

Hand sanitizer dispensers were installed in Vatican City offices last week, and there has been a nurse and a doctor on call at a Vatican clinic to give immediate assistance, according to the Holy See Press Office.

The Diocese of Rome has also canceled all non-liturgical parish events through March 15.

St. Peter's Basilica and the Vatican museums remain open to visitors. Rome has experienced a 90% decline in visitors since the outbreak in Italy, according to local media.

Covid-19 is a new strain of coronavirus, which can cause fever, cough, and difficulty breathing. In some cases, it can lead to pneumonia, kidney failure, and severe acute respiratory syndrome.

At least 414 people have recovered from Covid-19 in Italy, the Italian Ministry of Health reported March 5.

The Catholic charity Caritas and the community of Sant'Egidio have been working to help prevent the spread of the virus among the poor and homeless that they serve.

Caritas Milan has been checking the temperature of all who enter their homeless shelters and soup kitchens.

Sant'Egidio said that they have been extending their outreach to the elderly in Italy by delivering food and medicine and staying in touch with those in isolation.

Italy has the oldest population in the world after Japan; more than 23% of Italy's population is 65 years old or older in 2020.

"If the infection will spread out, solidarity and health care could be in conflict. We are finding  a balance," Francesco Chiavarin of Caritas Milan told EWTN.