Free World Class Education
FREE Catholic Classes
You may have never heard of Thwaites glacier. You soon will.

Scientists predict the Thwaites glacier in Antarctica will break up in three years. When it happens, it will raise sea levels by two feet or more. Worse, neighboring glaciers will be destabilized by the breakup. Coastal doomsday for hundreds of millions isn't decades away -- it's years away. And this will affect everything. 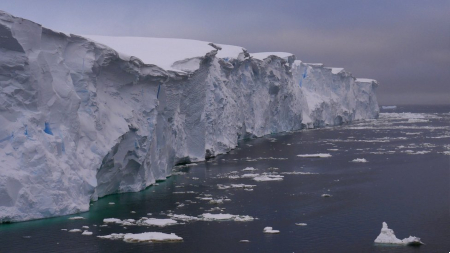 LOS ANGELES, CA (California Network) - In a few years, sea levels will begin to rise, rapidly and dramatically. When this happens, hundreds of millions of people around the world will be forced to adapt, with many moving inland. The economic and political disruption this is about to cause could change the world in unpredictable, destabilizing ways. Here's why we're in trouble.

The Thwaites glacier is the heart of a massive glacial complex in Antarctica. It's the widest glacier on the planet, about 80 miles wide, and almost 4,000 feet thick. The glacier is twice the size of the state of Florida and alone contains enough ice to raise global sea levels by two feet. That glacier is breaking up, and the event is happening so fast, scientists are able to watch the cracks form in real time. They now estimate the glacier will give way in about three years, not decades.

The glacier is so large and so critical, scientists call it the "Doomsday Glacier." Now they fear, doomsday has a date, and it's mere months away.

When Thwaites collapses, nearby glaciers, held in place on the Antarctic continent by this massive block of ice, will triple the speed at which they slide into the ocean. As these massive glaciers slide into the sea, levels will rise by at least another eight feet. And that's just the impact of one glacial complex in Antarctica. We must add to this the ice melting around the rest of the continent, and in Greenland.

Just a couple feet of sea level rise alone is enough to force tens of millions of people out of their coastal homes. Rich and poor alike will suffer increasing flood damage, coastal erosion will accelerate, and storm surges will flood low-lying regions, destroying homes, crops, and lives.

The economic losses are just the beginning. Political pressures will add to the chaos. It is difficult to predict the outcome of those pressures, since there will be many variables at work.

Although sea levels have been rising for decades, the rise has been slow, allowing coastal communities to adapt in a number of ways over an extended period of time. But now, massive changes could be forced in just a matter of a few years, and few communities, not to mention nations, will be able to adapt in time.

There is the hope the scientists are wrong, as they sometimes are. Yet, so far the scientists have been wrong in one direction -- they have habitually underestimated the speed and impact of these changes, and are often surprised by how fast such adverse events occur.

What we are seeing is a consequence of our consistent failure to act as stewards of creation. The Earth is given to us as a home, but we have failed to maintain that home. We have clear cut entire forests, burned billions of trees. We have overfished, hunted animals to extinction, refused to live in harmony with the environment, and even filled the oceans with plastic and toxic waste. The very waterways we depend upon for drinking water are literally polluted with drugs.

Ecological collapse, typically a local problem that's destroyed civilizations in the past (see: Maya, Easter Island)  is becoming a global phenomenon that will impact all of humanity in the very near term. Unless we turn to God and reform our thinking and behavior, we will reap consequences beyond our worst imagining.

Let us pray for the conversion of hearts.