If you want to see more of the Hoover Dam that ever before, now is the time to visit. The water levels in Lake Mead are so low, most of the dam's intake towers are visible, stained brown with decades of mud and slime. Indeed, Lake Mead is running dry, as are all the reservoirs across the American West. Extreme heat has turned brush into kindling, and disaster is coming. 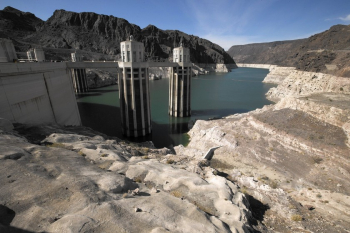 LOS ANGELES, CA (California Network) - Californians are pretty good when it comes to certain things. Driving the 405 during rush-hour is an exercise in extreme patience and careful driving. Earthquakes are no problem. Californians cheerfully compare notes on social media following a little shake, and virtually never panic. And when it comes to saving water, Californians are very good at that. Long ago, Californians learned to turn off the tap when shaving and brushing. They are quick to fix a leaky faucet, and they have converted their front lawns to host drought-resistant plants that can survive months without a drop. Cars are washed and rinsed with a bucket and a sponge, no hose required, or perhaps they simply go without. When dining out, you only get water if you ask for it. And if you really want to make your neighbors angry, run your water until it flows into the gutter and down the drain. In some places, that behavior is enough to warrant a citation.

Californians are good at saving water. However, the seasons to come will likely test their abilities beyond anything they've experienced before. That's because California is experiencing the worst drought in 1,200 years. Yes, that's twelve hundred years. And chances are, it's much worse than that because the drought is just beginning.

Hoover Dam's intake towers are mostly submerged (as they are designed to be) when lake Mede is full.

The climate record demonstrates that drought is common in California and the American West, especially in the desert southwest where the Mojave spans hundreds of miles from Southern California to Nevada, and into Arizona. From there, the dry Mojave gives way to other deserts that stretch as far east as Texas.

The indigenous people of the region knew how find, catch, and save water. When European settlers arrived, there was enough. As American settlers repopulated the region, they build increasingly complex irrigation projects to capture rain, prevent floods, and channel the precious liquid onto expansive farms, ranches, and suburbs. Today, these systems are fine-tuned to distribute only the water that is necessary to grow crops, feed livestock, and supply homes. But that is about to change. In fact, farms have already been forced to change their practices to conserve water. And this year, some fields are being left barren. Ranchers are sending livestock to slaughter sooner than they might because there isn't going to be enough water over the long California summer to sustain them.

What's worse, is it isn't clear that next year will be better, or the year after that. Droughts in California have become more severe, more long lasting, especially in the last few decades. Whereas before the state could see a few drier-than-average years, then enjoy a year of two of abundant, even excessive rain and snow, such cycles are fading into memory.

In 2017, California emerged from a long six-year drought, and 2021 could be just the beginning of another such event. From December through March, Southern California is often swept by a fresh storm every 7 to 10 days, more or less. This year, some parts of the state only experienced two appreciable storms. The dry, parched ground soaked up most of the precipitation before it could even reach a reservoir.

With conditions so dry, the state's expansive grasslands and brush have dried out weeks earlier than normal. The dead vegetation turns to kindling and fires inevitably result. A lightning strike, a careless camper, or sometimes an arsonist will start a fire which now has the potential to destroy hundreds of homes.

The problem is, California cannot expect relief to come in a year, or two years, or even six or seven. At this point, Californians are gambling if they wager that enough rain will fall in any given year. The trends are unmistakable, the entire region is undergoing a major shift in climate, and it isn't going to reverse, at least not in the lifetime of anyone present today.

Such shifts in climate do happen. The most famous shift happened in the Middle East in ancient times, turning the Fertile Crescent from a lush grassland into a parched desert. Even the Sahara Desert was once covered by trees and grass in prehistoric times. It is possible California could see something similar.

Now is the time for the state to develop new water infrastructure, to manage development in areas prone to wildfire, and for Californians to prepare for the most severe water restrictions of their lifetimes. Even if the summer of 2021 passes with few restrictions (although this is probably a fantasy itself) 2022 will be much more restrictive. What happens if there isn't enough water for crops, animals, and people? Who will suffer the most?

Farmers and ranchers especially have much to worry about, as do rural homeowners in fire-prone areas.

California is in the midst of the greatest natural disaster in its recorded history. If residents of the Golden State don't know it yet, they soon will.

The present problems, the lack of water and the raging fires to come are a stark warning to Californians and all. There are consequences for our choices --and our lack of choices. Only through education and preparation can we escape the harshness of this reality.