Greenland ice sheet passes 'point of no return' - so what happens next?

The Greenland Ice Sheet is a massive expanse of ice that covers most of the island. The ice sheet is now melting faster than it can be replenished. It will lead to a gradual rise in sea level, which is predictable. What is concerning are the unknown impacts of the melting. 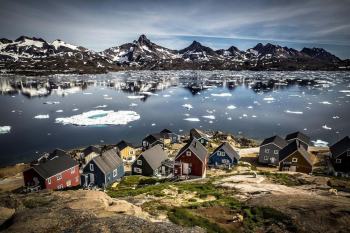 Greenland is doomed to melt. What will that mean for the rest of us?

LOS ANGELES, CA (California Network) - The Greenland ice Sheet is passing a "point of no return" and can no longer be saved. Ice is now melting faster than it can be replenished. Scientists say the outcome is now probably irreversible.

Researchers from the University of Ohio have just published a study in the Journal Nature, that review 40 years of satellite date to reach their conclusion. The study used data on 200 Greenland glaciers to form its conclusion. They discovered the ice is melting so fast that only 1 of 100 forecast years are likely to result in a net gain of ice.

The Greenland Ice Sheet is the world's second-largest body of land ice, second only to Antarctica. While the polar ice cap covers a much larger area, the ice that comprises the cap is formed from water and it does not make a net contribution to sea-level rise. However, land ice does cause sea level to rise as the previously land-bound water flows into the ocean.

The melting of the Greenland Ice Sheet is expected to add 23 feet to sea level over the next thousand years. Averaged out, that would be about one inch of sea level rise per 4-5 years, although the ice will not melt regularly. Instead, there may be periods of rapid melting and slow melting, with the melting accelerating over time.

The immediate consequence of this moment will not be very great. Most people alive today will not suffer the more severe consequences of sea level rise. Those most at risk are those who live on low-lying atolls in the Pacific and in low-lying coastal communities. This amounts to a handful of people worldwide. It should be noted, these people are already suffering these effects, they're just small in number compared to the rest of the world's coastal population.

However, as the years stretch into decades and the effect of melting snowballs, greater numbers will be impacted. Within a century or so, perhaps sooner, entire cities will have to re-engineer their coastal areas to prevent inundation.

The only good news is we see this coming and we have time. We think.

The problem are the unforseen consequences. For example, (and this is just one) as ice melt accelerates, pools of water form on the ice. These pools of water are darker than the ice and absorb and hold more heat, in turn accelerating the melting process. As the planet's atmosphere warms above Greenland, these pools will become more persistent, appearing earlier and lasting longer. And eventually, much of that pooled water will end up in the sea.

More worrisome, as more energy is absorbed on the surface, it creates a feedback loop of warming. And as warmer airmasses pass over Europe, Siberia, Alaska, and Northern Canada, they will heat the tundra causing the release of ancient methane. Methane is a more potent greenhouse gas than carbon dioxide. Of course, the most significant greenhouse gas is water vapor itself. And as water vapor absorbs longwave radiation and radiates heat back to the surface, warming will increase, thus increasing water vapor and the emission of CO2 and methane from the natural environment.

The warmer temps are concerning, but there is a stark, alarming possibility that the melting of the Greenland Ice Sheet could produce an ice age, which may prove even more devastating to humanity than warming.

The ice-age hypothesis says a sudden influx of freshwater from Greenland could slow or stop the North Atlantic cycles of salt-water which bring heat from the tropics to the North Atlantic and warm Northern Europe. If those currents are disrupted with cold, fresh water from Greenland, they will stop working and Northern Europe will freeze. Ice age conditions could take hold and large swathes of the planet could freeze, displacing humans and disrupting agriculture.

What will actually happen is unknown, all we know is the future won't be the same as today. For those who think this would solve the problem of warming, we must consider the impact of humanity. And no, it would not remove greenhouse gasses from the atmosphere.

Humans and nature can and will adapt over time, just as they always have. Climate change is part of nature and would happen regardless of human existence. The problem is only this: human activity is accelerating the rate of change so much that nature cannot develop adaptations to the new normal fast enough, resulting in mass extinctions. And while life will survive this mass extinction event, it will take millions of years to flourish again. In the meantime, what happens to us? What will we do if key components of the human food chain are reduced or go extinct? Will warfare erupt over control of shrinking food supplies?

We can mitigate and slow the impacts of climate change, but there is little else we can do other than try to stop the harmful effects of our activity. And we must find ways to mitigate those effects without harming the human condition. Otherwise, adaptation is our only resort.