Until today, Californians have lived without the slightest warning of a major quake. Now, on the 30-year anniversary of the 1989 "World Series Quake," the state's early warning system is coming online. 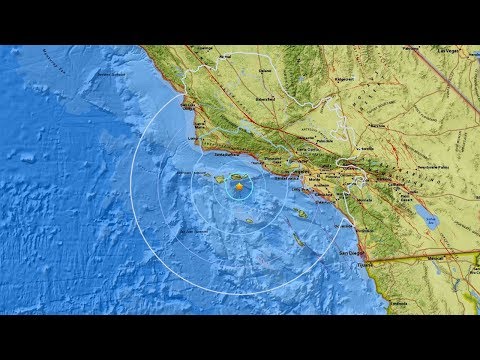 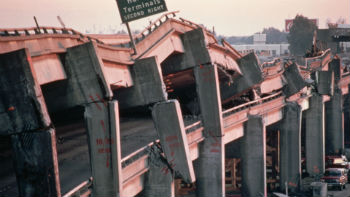 The 1989 Loma Prieta or World Series Quake caused major damage and 63 fatalities. Most of the fatalities occurred when the upper section of the 880 freeway collapsed onto the lower one, smashing cars.

LOS ANGELES, CA (California Network) - Thirty years ago, the world experienced a California quake on live television. Baseball fans were tuned in to Game 3 of the World Series between the Oakland A's and the San Francisco Giants at Candlestick Park. As commentators recapped some of the key plays in previous games, an undiscovered fault near the coastal town of Santa Cruz yielded under the pressure of plate tectonics. The background roar of the crowd rose as thousands of attendees felt the stadium shake. The picture cut out, and the last thing heard was announcer, Al Michaels exclaiming, "I tell you what, we're having an earth--."  The world spent a moment wondering what happened.

When coverage resumed, and Michaels announced they experienced an earthquake. The game's coverage was cut off and cameras cut to newsrooms running on generator power. Reports flooded in of fires and damage. The quake was felt as far away as Los Angeles.

Get the MyShake app here.

The World Series Quake struck at 5:04 PM, on October 17, 1989. It had a rating of 6.9 on the moment magnitude scale. The quake only lasted between 8 and 14 seconds, depending on location, but that was long enough for 63 people to lose their lives, and nearly 4,000 others to suffer injuries.

California is a rich state with great abundance. But residents know the state has a deep secret, it is crisscrossed with faults, some undiscovered. At any moment, one of these deep fractures in the earth can move, causing violent shaking, damage and loss of life. In just a few seconds, everything can be thrown into chaos. Fortunately, such events are rare. But there's no way to know when.

Californians are taught at a young age to "duck and cover." They know how important it is to dash under study objects at the first sign of a tremor. They know to wait for the jolt of the main shock, a few seconds after the rolling sensation hits. They know better than to run outside during the shaking, lest they be hit by falling debris. But unlike people who face disasters like blizzards, hurricanes and tornadoes, Californians don't get warnings. There's no such thing as "earthquake weather." There's no reliable method to predict a major quake.

Today, that changes just a little. Californians can now download a cellphone app called, "MyShake," which will alert them if they are about to feel moderate to strong shaking. Warnings will be transmitted to potentially affected residents using a system which sends out "Amber Alerts." Amber alerts are public notifications that ask the public for help in finding abducted children. They are uncommon, but attention-getting, since phones play an alert tone and buzz.

The Shake Alert system uses seismic sensors which are placed throughout the state. When sensors detect the first energy waves of an earthquake, they triangulate the location and estimate the intensity within a fraction of a second. A system then predicts how far the shaking will be felt, and will send an alert to the areas where moderate shaking or worse will be felt.

The system does not predict quakes, and can only work once a quake begins. For those at the epicenter, there won't be much warning. But for those who live a short distance away and will experience danger, the app can provide at least a one second or greater warning. The further a person is from the epicenter, the more warning time they will receive.

Those seconds can make the difference between life and death. Trains can be automatically braked. Airports can halt traffic. People can take cover.

Similar systems are online in China, Japan, and Mexico and have been for several years. California is catching up.

The system isn't perfect, and the state warns it will take time to work out all the issues. However, it is time to put it into residents' hands. Californians have been warned to be prepared for a major quake. Residents refer to this inevitable future event as the "Big One." But whether the Big One hits, or the event is smaller, like the pair which shook the Bay Area earlier this week, at least now residents will have some warning.