A cold airmass had dipped from the Arctic into Canada and the eastern U.S., causing temperatures to plunge 20 degrees below seasonal averages. At least one person has died from the cold. 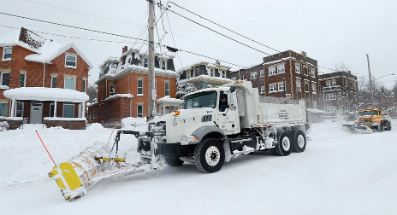 Erie, PA got more than 50 inches of snow in just two days.

LOS ANGELES, CA (California Network) - A polar vortex has brought record-shattering cold temperatures as well as heavy snow to most of Canada and the Eastern United States. Temps will remain below average at least until January.

Massive drifts of snow in places like Erie, PA have captured headlines. Erie was buried under more than 50 inches of snow, forcing locals to resort to using a bulldozer to clear streets. Record cold temperatures were reported across the region as far south as Missouri. Today, it is colder in Canada and the eastern U.S. than it is in Siberia or Antarctica (it is summer in Antarctica).

A homeless man froze to death at a bus stop in Cincinnati, OH, making him the first casualty of the record cold. There may be others, and suffering and misery are widespread.

While cold is a common denominator this time of year, the current spell is particularly bitter. The below seasonal temperatures are a product of the polar vortex. Normally the polar vortex, which is an upper-level low-pressure mass of air that generally remains fixed over the north pole. However, certain conditions can cause the polar jet stream, which corrals the vortex over the north pole, to weaken and meander. When that happens, the jet stream meanders south and cold polar air moves with it, chilling whatever it touches, sometimes as far south as the Gulf Coast. The western U.S. is protected by the Rocky Mountains, which helps channel the airmass to the east.

According to climate scientists, these events are increasing in frequency and severity because of global warming. According to their hypothesis, as the atmosphere warms, the jet stream confining the polar air weakens, causing the vortexes to move south.

The data to confirm this hypothesis is still being gathered, and so far no climate scientist is so bold as to claim that any specific weather event is "caused by global warming." Instead, global warming is more likely to make weather more unpredictable. The heat in the atmosphere is a form of energy, and more energy means more activity.

Is the present cold the product of global warming? Occasional blasts of arctic air are normal for the northern states. However, global warming does not cause this phenomenon itself, but it is believed to exacerbate these conditions.