Free World Class Education
FREE Catholic Classes
'Some of the things she does are disgusting.'

In 2014, singer/songwriter Katy Perry paid a visit to Boston, MA and took place in an event called the Salem Witch Walk. 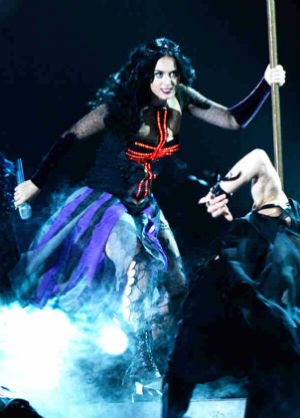 Katy Perry is currently battling it out in court while nuns and the Archdiocese of Los Angeles fight over ownership.

LOS ANGELES, CA (Catholic Online) - The star also stopped in a Crow Haven Corner, Salem's oldest witch shop. She posed with a friend beneath a sign reading, "Who are Witches?" and captioned the image, "Which witch is which?"

Unlike many events in the United States, the Salem Witch Walk isn't just a tourist attraction. According to their Facebook site, the event planners claim "real Salem Witches" teach "the truth about Witchcraft" and allow visitors to tour "enchanting sites, learn about charms, spells, and hexes" and each guest is gifted with a "magic crystal blessed by a Salem Witch!"

Perry, who has been hard at work to purchase a former convent in Los Angeles for the past several years, was called "disgusting" by the nuns who refuse to sell the property.

Seventy-eight-year-old Sister Rita Callanan and 86-year-old Sister Rose Catherine Holzman belong to the Order of the Immaculate Heart of the Blessed Virgin Mary. They believe Perry should not be allowed to purchase the property due to her anti-Catholic lifestyle.

"[I would] not be very happy at all if Perry got the property. I do not like Katy Perry's lifestyle," Sister Callanan told Daily Mail.

"I gave a lot of the things from the internet to show the Archdiocese what kind of woman she was," she continued. "Some of the things she does are disgusting."

The Sisters were so against selling to Perry that they turned to Pope Francis and his lawyer for aid.

"We have a lawyer in Rome," Sister Callanan shared. "I just don't think the Pope will let the Archbishop sell to Katy Perry."

Speaking from her home at St. Bernadette Catholic Church in Los Angeles, Sister Callanan said Perry met with the nuns "dressed very nicely and said: 'I have this tattoo on my wrist and it says Jesus.'"

The Sister admitted she wanted to respond, "yes and what is the tattoo on your behind?" but held her tongue. Instead, she questioned Perry on previous comments she made as she moved from Christian music to secular pop.

At the time, Perry had claimed she sold "her soul to the devil."

Continuing her line of questioning, Sister Callanan asked what Perry wanted to do with her life, to which the singer responded: "Well I don't know, that's why I want that property because I want to go down and sit down and drink green tea, and just go to the meditation garden and just meditate."

The Sister shared, "I just thought 'oh brother.'" She also claimed Perry said she "brought her mother Mary to the meeting and I just thought, 'Oh God help us.'"

When asking about Perry's trip to Salem, she asked if the star was "into witchcraft." 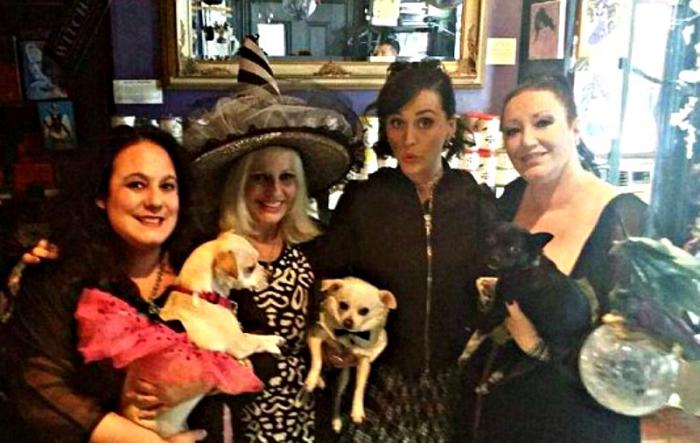 Nuns blast Katy Perry for claiming to not know she was at a Salem witchcraft event (The Salem Witch Walk/Facebook).

"She looked over at one of her people and said: 'Did I go to Salem, was I in Salem?' I said: 'Come on, you didn't know you were in Salem at a witchcraft thing. You don't remember it? That would stick out in my mind. I read it, was that incorrect information?'"

Sister Callanan said: "It disturbs me, and that was our mother house and our retreat house and it's sacred ground."

The nuns stake claim to the amazing property located in Los Feliz but the Archdiocese of Los Angles also claims it belongs to them, making the sale of the old convent even more difficult.

The archdiocese began moving nuns from the site one by one and those who remained until the last nun left in 2011. Since then, Sister Callanan shared her emails have been hacked, she has suffered health problems and has been the target of prank callers.

Worse, once the Sisters were out, the archdiocese' current archbishop, José Gómez, attempted to sell property the nuns consider theirs.

Their Order moved into the mansion when previous owner Daniel Donohue sold it to them for $600,000, which the Sisters claim to have paid him over a period of three years.

"What we are objecting to is the archbishop simply took our property and then literally tried to sell it to Katy Perry without even speaking to us," Sister Callanan stated. "People don't realize we are a pontifical order - we are under the Pope, not the archbishop which means strictly speaking he did not have the right.

"This is why myself and Sister Catherine Rose are so adamant. For us to be thrown under the bus, like you just don't exist, it's terrible. That's why we are fighting right now...I want the Pope to know what this man has been doing - this archdiocese needs to be cleaned out.

"...I think he [Gómez] would probably be happy if I just dropped dead."

The Sisters did a lot of good on the property during their time at the mansion. They ran retreats, did charity work and built up a multi-million dollar business. They helped people in the local community, Sister Callanan explained.

"We welcomed in the mothers  of teenagers who had been shot in LA. And when the LA riots happened we had both the Koreans and the Hispanics into the place. They were fighting and wanted their own day. I said: 'uh-uh, you can have a day of rest and we will put out coffee and tea and Crunchies our for you, but you can all come together and pray together. There will be none of this separation.'

"I ran a retreat house for about 10 years, we did a lot of charity and good and this archbishop, it is like we don't exist. Granted I am supposed to have great respect but he tried to get away with something and I thought, 'uh-uh.'"

Currently, Los Angeles Superior Court Judge Stephanie Bowick put a hold on the case while the issue of current ownership is resolved. Once the true owners of the property becomes clear, Perry will be eligible to purchase it or the judge can pass it off to the jury to decide. Her ruling is expected to be reported at a status conference set for April 4, 2017.