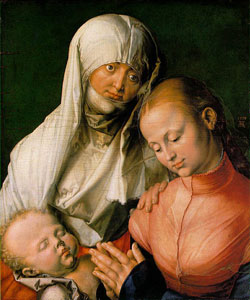 Hermitess, also called Susanna. Born in Constantinople in 840 to aristocrats, she fled the city to avoid marriage to Agarenus whose marriage proposal was supported by Emperor Basil the Macedonian. Anne went to Leucadia, Epirus, about 896. She lived as a hermitess there until her death. Anne may be the "Maura" listed in the Roman Martyrology as suffering martyrdom in Constantinople.

A Prayer To St. Anne Laminated Prayer Cards - (Pack of 25)