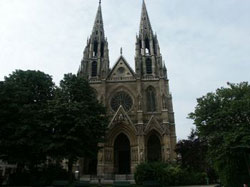 Clotilde St. Clotilde (c. 474- 545) and her husband King Clovis (c. 466-511) founded the Merovingian dynasty, which ruled the Franks for over 200 years. They were married in 492 or 493, and she converted him to Christianity in 496. When Clovis died, Clotilde retired to Tours. Her sons' quarrels caused her great sorrow. She died at the tomb of St. Martin of Tours and was buried in Sainte-Genevieve in Paris, a church that she and Clovis founded. St. Clotilde at prayer was a popular theme in Medieval art.