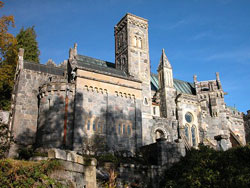 Conan The son of a general, Conan was elected pope in 686 as a compromise: the clergy wanted Peter, an archpriest, and the army wanted Theodore, a presbyter. Conan had been educated in Sicily and ordained in Rome. During his eleven-month reign, Justinian II reduced taxes on Lucani and Calabria, and Sicilian peasants revolted against the governor whom Conan had appointed.