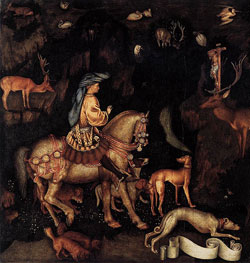 St. Eustace was born at Beauvais, France. He was ordained and served as a priest in his native diocese until he joined the Cistercians at Flay (St. Germer). He later was elected abbot, was apostolic legate to England for Pope Innocent III, and was later sent by Innocent as his legate to combat Albigensianism in southern France. His feast day is September 7th.