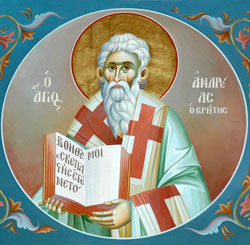 St. Andrew of Crete whose "Great Canon" the Orthodox pray during Lent, was born in Damascus. He became a monk at Mar Saba and served later at the Holy Sepulchre. Around 685, he was ordained a deacon at Hagia Sophia. He also ran a refuge that took in orphans and cared for the elderly. He ended his days as Archbishop of Gortyna, a position to which he was elevated in 692, on the island of Crete. He wrote homilies that display great oratorical skill, as well as panegyrics to the saints. Some say that he invented the canon.