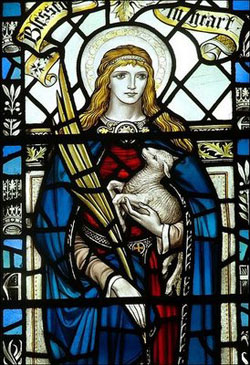 A popular saint about whom little is known, Agnes is said to have been a beautiful, wealthy Roman maiden who had, in childhood, dedicated herself to God. Some say that a rejected suitor betrayed her to authorities; others say that she was asked at 13 to sacrifice to the gods and marry, both of which she refused. Legends tell of her being thrown into a brothel, where her purity was miraculously preserved. Having escaped that fate, she was martyred. In the IV Century, Constantia, the daughter of Constantine, built a basilica on the site of her tomb. St. Ambrose wrote about Agnes in De virginitate, and Damasus I wrote an epitaph for her. Prudentius composed a hymn in her honor. Her emblem in art is the lamb because of the similarity between her name and the Latin word for lamb, agnus.