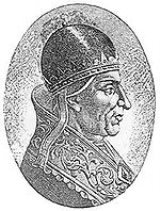 Alexander II, Anselm by birth, was born in Baggio and is thought to have been a student of Lanfranc at Bec. Ordained a priest c. 1055, Alexander belonged to the Pataria, a group of churchmen who opposed simony and supported clerical celibacy. In 1057, he became bishop of Lucca and was elected to the papacy in 1061. He opposed lay investiture and was enthroned without the consent of Henry IV, Holy Roman Emperor, who then elected his own anti-pope. Alexander was accused in 1064 of buying the papacy but cleared himself at the Council of Mantua in the same year. For the rest of his reign, which ended in 1073, Alexander sought to reform the church and fought with the emperor over lay investiture.