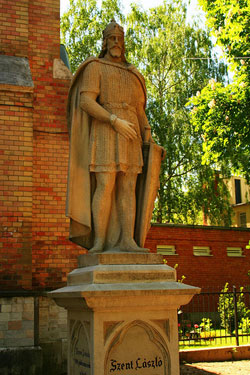 Laszlo was the son of King Bela of Hungary. He was born at Neustra on July 29 and was elected King of Hungary by the nobles in 1077. He was at once faced with the claims of a relative and son of a former King, Solomon, to the throne, and defeated him on the battlefield in 1089. He supported Pope Gregory VII in his investiture struggle against Emperor Henry IV, and Rupert of Swabia, Henry's rival; Laszlo married Adelaide, daughter of Duke Welf of Bavaria, one of Rupert's supporters. Laszlo successfully repelled Cuman attempts to invade Hungary, encouraged Christian missionaries, and built many churches, but allowed religious freedom to the Jews and Mohammedans in his realms. In 1091, he marched to the aid of his sister Helen, Queen of Croatia, against the murderers of her husband, and when she died childless, annexed Croatia and Dalmatia despite objections from the Pope, the Emperor in Constantinople, and Venice. At the Synod of Szabolcs in 1092, he promulgated a series of laws on religious and civil matters. He was chosen to lead the armies of the First Crusade but before he could do so died at Nitra, Bohemia, on July 29 when he was fifty-five years old. He is one of the great national heroes of Hungary and made Hungary a great state, extending its borders and defending it successfully against invasion. He was venerated from the time of his death for his zeal, piety, and moral life, and was canonized in 1192 by Pope Celestine III. Laszlo is known in Polish as Ladislaus. His feast day is June 27.