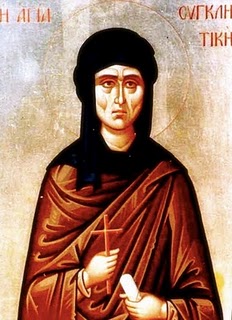 St. Syncletica was born at Alexandria in Egypt, of wealthy Macedonian parents. From her infancy she had imbibed the lore of virtue, and in her tender years she consecrated her virginity to God. Her great fortune and beauty induced many young noblemen to become her suitors for marriage, but she had already bestowed her heart on her heavenly spouse. Flight was her refuge against exterior assaults, and, regarding herself as her own most dangerous enemy, she began early to subdue her flesh by austere fasts and other mortifications. She never seemed to suffer more than when obliged to eat oftener than she desired. Her parents, at their death, left her heiress to their opulent estate; for the two brothers she had died before them; and her sister being blind, was committed entirely to her guardianship. Syncletica, having soon distributed her fortune among the poor, retired with her sister into a lonesome monument, on a relation's estate; where, having sent for a priest, she cut off her hair in his presence, as a sign whereby she renounced the world, and renewed the consecration of herself to God. Mortification and prayer were from that time her principal employment; but her close solitude, by concealing her pious exercises from the eyes of the world, has deprived us in a great measure of the knowledge of them.     The fame of her virtue being spread abroad, many women resorted to her abode to confer with her upon spiritual matters. Her humility made her unwilling to take upon herself the task of instructing, but charity, on the other side, opened her mouth. Her pious discourses were inflamed with so much zeal, and accompanied with such an unfeigned humility, and with so many tears, that it cannot be expressed what deep impressions they made on her hearers. "Oh" said the saint, "how happy should we be, did we but take as much pains to gain heaven and please God, as worldlings do to heap up riches and perishable goods! By land they venture among thieves and robbers; at sea they expose themselves to the fury of winds and storms; they suffer shipwrecks, and all perils; they attempt all, try all, hazard all but we, in serving so great a master, for so immense a good, are afraid of every contradiction." At other times, admonishing them of the dangers of this life, she was accusoned to say, "We must be continually upon our guard, for we are engaged in a perpetual war; unless we take care, the enemy will surprise us, when we are least aware of him. A ship sometimes passes safe through hurricanes and tempests, yet, if the pilot, even in a calm, has not a great care of it, a single wave, raised by a sudden gust, may sink her. It does not signify whether the enemy clambers in by the window, or whether all at once he shakes the foundation, if at last he destroys the house. In this life we sail, as it were, in an unknown sea. We meet with rocks, shelves, and sands; sometimes we are becalmed, and at other times we find ourselves tossed and buffeted by a storm. Thus we are never secure, never out of danger; and, if we fall asleep, are sure to perish. We have a most intelligent and experienced pilot at the helm of our vessel even Jesus Christ himself, who will conduct us safe into the haven of salvation if, by our supineness, we cause not our own perdition." She frequently inculcated the virtue of humility, in the following words: "A treasure is secure so long as it remains concealed; but when once disclosed, and laid open to every bold invader, it is presently rifled; so virtue is safe so long as secret, but, if rashly exposed, it but too often evaporates into smoke. By humility, and contempt of the world, the soul, like an eagle, soars on high, above all transitory things, and tramples on the backs of lions and dragons. By these, and the like discourses, did this devout virgin excite others to charity, humility, vigilance, and every other virtue.     The devil, enraged to behold so much good, which all his machinations were not capable to prevent, obtained permission of God, for her trial, to afflict this his faithful servant, like another Job: but even this served only to render her virtue the more illustrious. In the eightieth year of her age she was seized with an inward burning fever, which wasted her insensibly by its intense heat; at the same time an imposthume was formed in her lungs; and a violent and most tormenting scurvy, attended with a corroding hideous stinking ulcer, ate away her jaws and mouth, and deprived her of her speech. She bore all with incredible patience and resignation to God's holy will; and with such a desire of an addition to her sufferings, that she greatly dreaded the physicians would alleviate her pains. It was with difficulty that she permitted them to pare away or embalm the parts already dead. During the three last months of her life, she found no repose. Though the cancer had robbed her of her speech, her wonderful patience served to preach to others more movingly than words could have done. Three days before her death she foresaw, that on the third day she should be released from the prison of her body; and on it, surrounded by a heavenly light, and ravished by consolatory visions, she surrendered her pure soul into the hands of her Creator, in the eighty-fourth year of her age. The Greeks keep her festival on the 4th, the Roman Martyrology mentions her on the 5th of January.