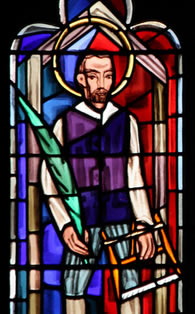 Nicholas was born at Oxford, England. He became a carpenter or builder and served the Jesuit priests in England for two decades by constructing hiding places for them in mansions throughout the country. He became a Jesuit lay brother in 1580, and was arrested in 1594 with Father John Gerard, and despite prolonged torture would not give the names of any of his Catholic colleagues; he was released on the payment of a ransom by a wealthy Catholic. Nicholas is believed responsible for Father Gerard's dramatic escape from the Tower of London in 1597. Nicholas was again arrested in 1606 with Father Henry Garnet, who he had served eighteen years, Father Oldcorne, and Father Oldcorne's servant, Brother Ralph Ashley, and imprisoned in the Tower of London. Nicholas was subjected to such vicious torture that he died of it on March 2nd. He was known as Little John and Little Michael and used the aliases of Andrews and Draper. He was canonized by Pope Paul VI in 1970 as one of the Forty Martyrs of England and Wales. His feast is March 22nd.