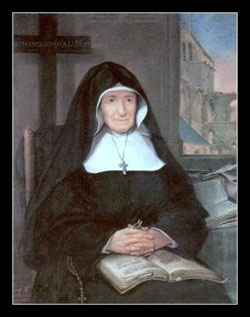 Mary was born at Barfleur, France, on November 28 and baptized Julia Frances Catherine. She was educated at the Benedictine convent at Valognes, and when eighteen she opened a school for girls at Barfleur. When the French Revolution broke out, the revolutionaries closed the school and she became a leader in Barfleur against the constitutional priests and sheltered fugitive priests in her home, where Mass was celebrated. When the concordat of 1801 between Napoleon and the Holy See brought peace to the French Church, she worked in the field of religious education, and in 1807, at Cherbourg, she and three other teachers took religious vows before Abbe Cabart, who had encouraged her in her work - the beginning of the Sisters of the Christian Schools of Mercy. She was named superior and took the name Mary Magdalen. During the next few years the community encountered great difficulties and was forced to move several times before settling at Tamersville in 1815. It was not until she obtained the abbey of St. Sauveur le Vicomte that the congregation finally began to expand and flourish. She died on July 16 at St. Sauveur, venerated for her holiness and miracles, and was canonized in 1925. Her feast day is July 16.