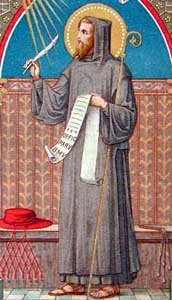 St. Peter Damian is one of those stern figures who seem specially raised up, like St. John Baptist, to recall men in a lax age from the error of their ways and to bring them back into the narrow path of virtue. He was born at Ravenna and, having lost his parents when very young, he was left in the charge of a brother in whose house he was treated more like a slave than a kinsman.

As soon as he was old enough he was sent to tend swine. Another brother, who was archpriest of Ravenna, took pity on the neglected lad and undertook to have him educated. Having found a father in this brother, Peter appears to have adopted from him the surname of Damian.

Damian sent the boy to school, first at Faenza and then at Parma. He proved an apt pupil and became in time a master and a professor of great ability. He had early begun to inure himself to fasting, watching and prayer, and wore a hairshirt under his clothes to arm himself against the alurements of pleasure and the wiles of the devil. Not only did he give away much in alms, but he was seldom without some poor persons at his table, and took pleasure in serving them with his own hands.

After a time Peter resolved to leave the world entirely and embrace a monastic life away from his own country. While his mind was full of these thoughts, two religious of St. Benedict, belonging to Fonte Avellana of the Reform of St. Romuald, happened to call at the house where he lived, and he was able to learn much from them about their Rule and mode of life. This decided him and he joined their hermitage, which was then in the greatest repute. The hermits, who dwelled in pairs in separate cells, occupied themselves chiefly in prayer and reading, and lived a life of great austerity.

Peter's excessive watchings brought on a severe insomnia which was cured with difficulty, but which taught him to use more discretion. Acting upon this experience, he now devoted considerable time to Sacred studies, and became as well versed in the Holy Scriptures as he formerly had been in profane literature.

By the unanimous consent of the hermits he was ordered to take upon himself the government of the Community in the event of the superior's death. Peter's extreme reluctance obliged the abbot to make it a matter of obedience. Accordingly after the abbot's decease about the year 1043, Peter assumed the direction of that holy family, which he governed with great wisdom and piety. He also founded five other hermitages in which he place Priors under his own general direction. His chief care was to foster in his disciples the spirit of solitude, charity, and humility. Many of them became great lights of the Church, including St. Dominic Loricatus, and St. John of Lodi, his successor in the priory of the Holy Cross, who wrote St. Peter's life and at the end of his days became Bishop of Gubbio.

For years Peter Damian was much employed in the service of the Church by successive Popes, and in 1057 Stephen IX prevailed upon him to quit his desert and made him Cardinal-bishop of Ostia. Peter constantly solicited Nicholas II to grant him leave to resign his bishopric and return to the solitude, but the Pope had always refused.

His successor, Alexander II, out of affection for the holy man, was prevailed upon with difficulty to consent, but reserved the power to employ him in Church matters of importance, as he might hereafter have need of his help. The saint from that time considered himself dispensed not only from the responsibility of governing his See, but from the supervision of the various religious settlements he had controlled, and reduced himself to the condition of a simple monk.

In this retirement, he edified the Church by his humility, penance and compunction, and labored in his writings to enforce the observance of morality and discipline. His style is vehement, and his strictness appears in all his works - especially when he treats of the duties of the clergy and of monks. He severely rebuked the Bishop of Florence for playing a game of chess. That prelate acknowledged his amusement to be unworthy, and received the holy man's reproof meekly, submitting to do penance by reciting the psalter three times and by washing the feet of twelve poor men and giving them each a piece of money.

Peter wrote a treatise to the Bishop of Besancon in which he inveighed against the custom by which the Canons of that Church sang the Divine Office seated in choir, though he allowed all to sit for the lessons. He recommended the use of the discipline as a substitute for long penitential fasts. He wrote most severely on the obligation of monks and protested against their wandering abroad, seeing that the spirit of retirement is an essential condition of their state. He complained bitterly of certain evasions whereby many palliated real infractions of their vow of poverty. He justly observed, "We can never restore primitive discipline when once it is decayed; and if we, by negligence, suffer any diminution in what remains established, future ages will never be able to repair the breach. Let us not draw upon ourselves so foul a reproach; but let us faithfully transmit to posterity the example of virtue which we have received from our forefathers."

St. Peter Damian fought simony with great vigor, and equally vigorously upheld clerical celibacy; and as he supported a severely ascetical, semi-eremitical life for monks, so he was an encourager of common life for the secular clergy. He was a man of great vehemence in all he said and did; it has been said of him that "his genius was to exhort and impel to the heroic, to praise striking achievements and to record edifying examples...an extraordinary force burns in all that he wrote".

In spite of his severity, St. Peter Damian could treat penitents with mildness and indulgence where charity and prudence required it. Henry IV, the young king of Germany, had married Bertha, daughter of Otto, Marquee of the Marches of Italy, but two years later he sought a divorce under the pretense that the marriage had never been consummated.

By promises and threats, he won over the archbishop of Mainz, who summoned a council for the purpose of sanctioning the annulment of the marriage; but Pope Alexander II forbade him to consent to such an injustice and chose Peter Damian as his legate to preside over the synod.

The aged legate met the king and bishops at Frankfurt, laid before them the order and instructions of the Holy See, and entreated the king to pay due regard to the law of God, the Canons of the Church and his own reputation, and also to reflect seriously on the public scandal which so pernicious an example would give. The nobles likewise entreated the monarch not to stain his honor by conduct so unworthy.

Henry, unable to resist this strong opposition, dropped his project of a divorce, but remained the same at heart, only hating the queen more bitterly than ever. Peter hastened back to his desert of Fonte Avellana.

Whatever austerities he prescribed for others, he practiced himself, remitting none of them even in his old age. He use to make wooden spoons and other little useful things that his hands might not be idle during the time he was not at work or at prayer.

When Henry, Archbishop of Ravenna, had been excommunicated for grievous enormities, Peter was again sent by Alexander II as legate to settle the troubles. Upon his arrival at Ravenna he found that the prelate had just died, but he brought the accomplices of his crimes to a sense of their guilt and imposed on them suitable penance. This was Damian's last undertaking for the Church.

As he was returning towards Rome, he was arrested by an acute attack of fever in a monastery outside Faenza, and died on the eighth day of this illness, while the monks were reciting Matins round about him, on February 22, 1072.

St. Peter was one of the chief forerunners of the Hildebrandine reform in the Church. His preaching was most eloquent and his writing voluminous, and he was declared a doctor of the Church in 1828. His feast day is February 21st.