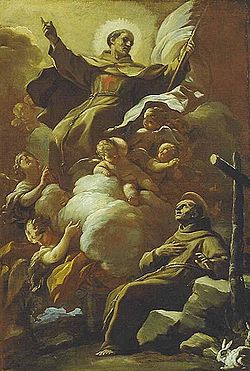 Saint Peter of Alcantara was born in Alcantara, Spain in 1499. His father was the Governor of the province and his mother came from a noble family. He was privately tutored and attended the University of Salamanca. After he returned home from university, he joined the Franciscans.

Peter was accepted as a Franciscan Friar of the Stricter Observance in the Friary at Manxaretes Extramadura in 1515.

At the young age of 22, he was sent to found a community of the Stricter Observance at Badajoz.

He was ordained as a priest in 1524 and in 1525 he became Guardian of the friary of St. Mary of the Angels at Robredillo, Old Castile.

He later entered the Order of the reform of the Discalced Friars. By 1538, he was elected the Superior of St. Gabriel province. As the superior, he drew up new constitutions for the order of Stricter Observance, however these were met with resistance. Eventually he resigned from this post.

Peter then began a new life, one of less formal responsibility but one of greater spiritual responsibility. He took up his spiritual cross and preached with great success to the poor. Peter preferred preaching to this group more than any other and he frequently drew inspiration from the Old Testament books. His sermons often concentrated on the topic of on compassion.

When Peter was not preaching, he would spend long periods of time in solitude. From 1553 to early 1555, he spent this time alone in meditation and prayer. Following these two years of solitude, Peter made a pilgrimage to Rome, barefoot the entire way. While in Rome he obtained permission from Pope Julius III to establish friaries, departing on his new mission just before the Holy Father's death.

Along his way home, Peter established several friaries. These friaries were compelled to follow a strict constitution, mush like the ones he endeavored to impose in St. Gabriel province.

This time, his new constitution contained reforms that proved fruitful and were later adopted across Spain.

Peter was known for frequently experiencing ecstasy, a state where he was entirely consumed with the warmth and light of the Holy Spirit. These euphoric moments were common during his prayer and meditation. Some claim to have witness him levitate.

When he was close to death, Peter took to his knees and prayed. When he was offered water he refused it saying, "Even my Lord Jesus Christ thirsted on the Cross." Peter died in prayer on October 18, 1562.

Following his death, Peter was beautified by Pope Gregory XV on April 18, 1622. He was subsequently canonized by Pope Clement IX on April 28, 1669.

St. Peter of Alcantara is the patron saint of the Nocturnal Adoration of the Blessed Sacrament.