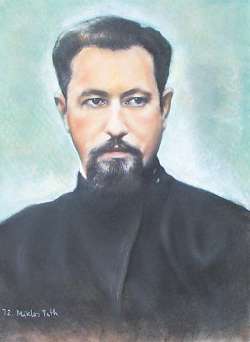 The Servant of God Bishop Theodore Romzha was born on 14 April 1911, in the village of Veliky Bychkiv, Transcarpathia. From 1930-1933, he studied philosophy in Rome and completed his theological education also in Rome from 1933-1937, culminating in a Licentiate. Shortly thereafter, he became an administrator of the parish in Berezovo. Beginning in 1939, he was a professor of philosophy at the seminary in Uzhorod. On 24 September 1944, he was ordained to the episcopacy for the Mukachevo eparchy. During the Red Army presence in the Carpathian region of Ukraine, he was tireless in his defence of the rights of the Catholic Church there. On 27 October 1947, the Soviets attempted to kill Bishop Romzha. Heavily wounded, he was taken to the hospital in Mukachiv, where he was subsequently poisoned and died on 1 November 1947.