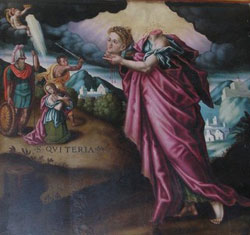 Many churches in southern France and northern Spain have been dedicated under the name of the virgin martyr St. Quiteria, who still enjoys a wide following, especially at Aire in Gascony, where her reputed relics were preserved until they were scattered by the huguenots. On the other hand, though her name appears in the Roman Martyrology, no mention of her is made in any of the ancient calendars. She is popularly supposed to have been the daughter of a Galician prince, who fled from her home because her father wished to force her to marry and to abjure the Christian religion. She was tracked to Aire by emissaries by her father, by whose orders she was beheaded. Most of the details of the story, in the form in which it was most widely circulated, are fabulous, having been borrowed from the well known legend of King Catillius and Queen Calsia, and nothing is certain about Quiteria except her name and her cultus. Because she is invoked against the bite of mad dogs, she is always depicted with a dog on a lead. It seems that Portugal is especially devout to St. Quiteria, but tells a different story of her martyrdom and claims to possess her relics.  Her feast day is May 22nd.

Today, we humbly ask you to defend Catholic Online's independence. 98% of our readers don't give; they simply look the other way. If you donate just $5.00, or whatever you can, Catholic Online could keep thriving for years. Most people donate because Catholic Online is useful. If Catholic Online has given you $5.00 worth of knowledge this year, take a minute to donate. Show the volunteers who bring you reliable, Catholic information that their work matters. If you are one of our rare donors, you have our gratitude and we warmly thank you. Help Now >
Continue reading about St. Quiteria