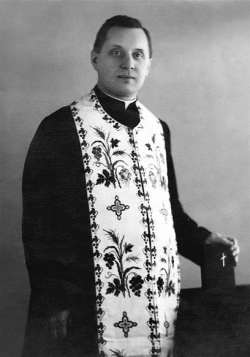 The Servant of God Bishop Simeon Lukach was born on 7 July 1893 in the village of Starunia, Stanislaviv Region. His parents were simple villagers who worked the land. In 1913, he entered the seminary. His studies were interrupted for two years during World War I but he was able to complete his studies in 1919. That same year he was ordained a priest by Bishop Hryhory Khomyshyn. He taught moral theology at the seminary in Stanislaviv (now Ivano-Frankivsk) until April 1945, when it is suspected that Bishop Hryhory secretly ordained him a bishop. On 26 October 1949 he was arrested by the NKVD and was released on 11 February 1955. He functioned as an underground member of the clergy, but in July 1962 he was arrested for a second time and appeared in court with Bishop Ivan Sleziuk, who too was an underground bishop. While in prison, he was stricken with tuberculosis, which hastened his death on 22 August 1964.