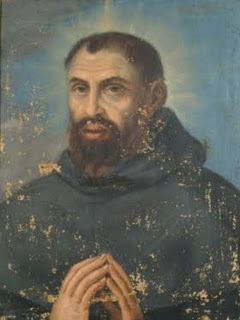 Melchior Chylinski was born on January 8, 1680/1690 in the village of Wysacaka (Wysoczka),Poland; near Buk, in the Archdiocese of Poznan. His father was John Arnold (Arnolfa) Chylinski and Margaret (Mariann) Kierski of the nobility. Although Rafael was born into the nobility, he left his hereditary rights and privileges to become a Conventual Franciscan.

Melchior attended school in the village of Buk. His father, John Arnold Chylinski, died of the plague on October 8, 1707. Their manor house was burned to the ground. Since they no longer had a home, Bishop Stanislaus Kierski helped Margaret Kierski raise her sons. It is not specified (in my source) whether the Bishop was Margaret's kin. However, there is a good chance he was her brother. Bishop Stanislaus Kierski sent both boys to a Jesuit school in Poznan.

In 1712, Melcior served in the Polish Army and became an officer. In 1715, he left the Army and moved to Cracow, where he joined the Franciscan Fathers as a cleric. On April 4, 1715, Rafael was baptized into the order and received the name Rafael. On April 26, 1715, he was professed. He was ordained to the priesthood (in Poznan) in 1717. He traveled to monasteries in Radziejow, Poznan, Gniezno, Warsaw, Kalisz, Warta, and Crakow. From 1728-1736, he served in the Lageiewniki, part of the parish of Lodz. He died there on December 2, 1742.

Rafael devoted his life to prayer, and he cared for the poor and the sick, often serving water to the dying. He worked on saving souls, and was an exorcist. It was said that he used no Latin or rhetoric in his sermons, but spoke in the language of his people. He repeated: "My soul, love God. Love Jesus and the Blessed Mother."

Rafael cared for his mother, by permission of his superiors, after their home was burned. She lived in Lagiewnik. In 1736, during the Cracow (Krakow) plague, he cared for the sick in hospitals and in their homes.

He honored the crucified Christ, and his suffering, pain, and death at every mass he celebrated. He often repeated: "Oh, how good, how good is God. We have a Good Lord."

He wore a hair shirt, metal belt, and did scourging. He slept for only three hours and many times his bed was a bare board on the floor. He fasted and endured two leg ulcers.

After his death, God favored him with glory to those who prayed to him. In 1761, when his body was exhumed, his body was still intact and was moved to an oaken casket. Wladyslaw Lubienski, primate of Poland, and his committee examined Rafael's life. In 1765/6, King Stanislaw Poniatowski and clergy requested beautification, but the partition of Poland stopped this action.

His casket was opened again on May 13, 1949; before the Bishop of Lodz. Again his remains were in a good state of preservation and again he was dressed in a new habit. Pope Pius XII declared him venerable, and he was buried in Lagiewnik. He was beautified on June 9, 1991; by Pope John Paul II.